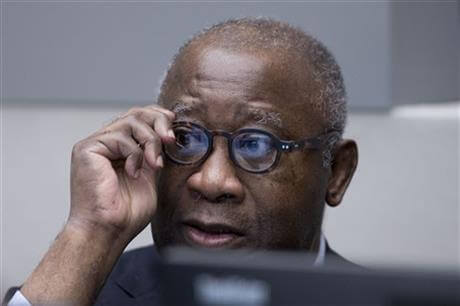 THE HAGUE, Netherlands (AP) — Former Ivory Coast president Laurent Gbagbo unleashed a wave of deadly violence targeting political opponents in a doomed attempt to cling to power after losing a 2010 election runoff, the International Criminal Court’s chief prosecutor said Thursday as the court’s landmark first trial of an ex-head of state got underway.

“Nothing would be allowed to defeat Mr. Gbagbo,” Prosecutor Fatou Bensouda told a panel of three judges. “If politics failed, violence was seen as politics by other means.”

Human rights activists welcomed the trial as a clear signal that leaders who resort to violence to strengthen their grip on power will be held to account.

Gbagbo is accused together with a former youth minister, Charles Ble Goude, of involvement in atrocities that left 3,000 people dead after the disputed presidential runoff in their West African nation.

Sponsored Links
Know the latest real estate news first
PNC
Boat Comes In Fast, But Wait…
Road-Dirt
As the trial opened, the 70-year-old Gbagbo and Ble Goude, 44, both pleaded not guilty to four charges of crimes against humanity including murder, rape and persecution.

Bensouda said she would call 138 witnesses including victims of violence and members of Gbagbo’s inner circle to testify about his alleged involvement in plotting the post-election violence even before the 2010 vote.

She made particular mention of one woman who was arrested during a demonstration by supporters of Gbagbo’s political rival, current President Alassane Ouattara, and detained at a police headquarters for three days.

“During those three dark days she was raped, gang raped at the prefecture of police by armed gendarmes,” Bensouda said.

Gbagbo remains popular among some Ivoirians. Dozens massed outside the court ahead of the trial, which is expected to last many months, and in Abidjan about 300 Gbagbo supporters packed into an events hall in the working-class district of Yopougon to watch the trial. Organizers sold T-shirts featuring Gbagbo’s smiling face.

The crowd cheered loudly when Gbagbo and Ble Goude first appeared on the screen and when they pleaded not guilty. Some members shouted “Liar!” and shook their heads in disapproval as the charges against the two men were read out.

“I think we must free Gbagbo because he’s the one who can bring peace to Ivory Coast,” said supporter Armand Yapi. “He has no place in The Hague. His place is here.”

At the end of Thursday’s hearing, Gbagbo supporters in the court’s public gallery stood and cheered as he was led out of the courtroom, chanting “Gbagbo President!”

A former university professor who founded an opposition party well before Ivory Coast embraced democracy, Gbagbo spent much of the 1980s in exile in France. After returning to Ivory Coast, he lost the 1990 presidential vote and spent six months in jail in 1992 for his role in student protests.

He came to power in 2000 in a flawed vote he himself described as “calamitous,” although he put off holding another one for a decade. In the 2010 race, Gbagbo placed first in the first round with 38 percent of the vote before losing to Ouattara in the runoff.

Ble Goude was a “self-proclaimed general of the streets” who “manipulated the youth with hateful rhetoric,” Bensouda said.

“Today, victims who suffered unspeakable crimes at the hands of pro-Gbagbo forces are one step closer to seeing justice,” she said.

Activists also cautioned that crimes allegedly committed by Ouattara supporters must be prosecuted.

“All those suspected of criminal responsibility for these horrific crimes, including current President Alassane Ouattara’s supporters, must be brought to account through fair trials, either in-country or by the ICC,” said Gaetan Mootoo, a West Africa researcher with Amnesty International.

Bensouda has pledged to bring both sides to justice.

“This is our first case to reach trial” linked to Ivory Coast crimes, Bensouda said. “There will be others.”