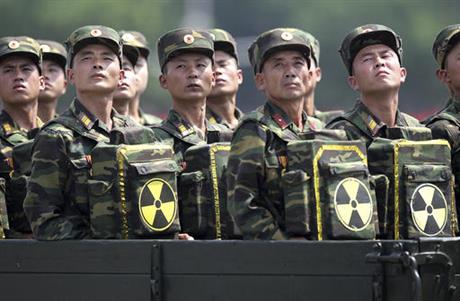 By ERIC TALMADGE
Mark up another first for North Korea — two nuclear tests in one year. And that’s not all. With leader Kim Jong Un smiling broadly all the while, bigger and better ballistic missiles have been flying off the North’s shores, and now even from under its waters, at breakneck pace.

With few other options, or allies to rally behind it, this is how Pyongyang likes to play its cards in the power game that is northeast Asian politics. The question is whether it can play them well enough to get what its ruling regime really wants: international recognition, security guarantees and, at the most fundamental level, its own continued survival.

This is shaping up to be the busiest year ever for North Korea’s nuclear and missile programs. It rang in 2016 with what it said was its first H-bomb test and has been shooting off various kinds of long-range missiles — including one from a submarine — more frequently than normal. It conducted its second nuclear test of the year Friday, this time to indicate it can arm those ballistic missiles it’s been testing with nuclear-tipped warheads.

by TaboolaMore from AP
The Latest: Trump says critics didn’t understand speech
The Latest: Trump would give generals 30 days for IS plan
While most of the world has singled Pyongyang’s nuclear program out as a dangerous source of instability on the peninsula, North Korea has consistently said it needs a nuclear deterrent to what it believes is a very real threat from the United States. The two countries are, after all, still technically at war. The 1950-53 Korean conflict ended in an armistice, not a peace treaty.

Right after announcing its test, the North’s state-run Korean Central News Agency once again made that argument.

“The U.S. desperate moves for unilaterally putting sanctions and stifling the DPRK are a hideous crime against humanity aimed at subversion of the social system of a sovereign country,” the report said, using the acronym for North Korea’s official name, the Democratic People’s Republic of Korea.

“The U.S. should never underestimate the tremendous mental power and inexhaustible might of the DPRK,” it added. “The U.S. will be made to clearly see how the DPRK rises imposingly out of chains of sanctions, blockade and pressure.”

That’s been Pyongyang’s position for decades. And it hasn’t gotten a lot of traction.

Its test Friday was immediately criticized by its neighbors — including its nominal ally, China — and by Washington. Japan, which is within range of the North’s missiles and hosts tens of thousands of U.S. troops, called for an emergency meeting of the United Nations Security Council.

The North is already under the toughest sanctions it has faced in decades because of its January nuclear test.

More now are almost certain, though some experts question whether North Korea has anything significant left to apply effective sanctions to. Advocates of a tougher approach are hoping the latest test will galvanize support from China and Russia, which have not been totally on board with Washington’s approach to Pyongyang.

So why does Pyongyang insist on stirring the pot?

Its flurry of demonstrations of military might this year may reflect a greater sense of urgency to prove it can make good on Kim Jong Un’s vow to build ever better nukes while also keeping its economy afloat despite all of the pressure, isolation and international sanctions that policy generates.

There are indications it is, in reality, making progress on both fronts.

Largely thanks to continued business with China and Russia, the North’s economy — though hardly robust — long ago emerged from the disastrous famine years of the 1990s and now shows signs of a growing domestic consumer market, where small-time entrepreneurialism is allowed and sometimes tacitly supported by the authorities.

For sure, the repeated nuclear tests come at a high cost in lost trade and international diplomatic clout.

But each improvement demonstrated to the world brings the North that much closer to becoming a de facto nuclear power. Pyongyang could conceivably use that in the future to get itself into a better negotiating position in talks with Washington. Or, at some point, Washington and its allies might give up and grudgingly accept the country into the nuclear club.

It’s hard to imagine in North Korea’s case, but it worked for India and Pakistan. With elections coming up in the United States, Pyongyang may see this as an opportune time to send a message.

But Pyongyang also has reasons to be nervous.

Over the past few years, its anxieties have been heightened by attacks on its human rights record in the United Nations and suggestions Kim should be brought before an international tribunal for crimes against humanity. Add to that reports that annual U.S.-South Korea military exercises now include training for “decapitation strikes” on Kim and other leaders, and Washington’s decision in June to list Kim himself as a sanctioned individual.

Pyongyang is also deeply concerned by an agreement between Washington and Seoul to base America’s most advanced missile defense system, known by its acronym, THAAD, in the South, a move that has angered Beijing as well.

Talmadge has been the AP’s Pyongyang bureau chief since 2013.