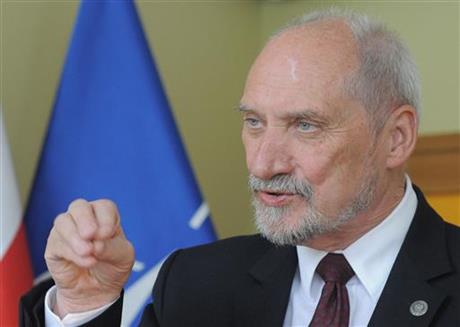 By MONIKA SCISLOWSKA
Decisions to be approved at this week’s NATO summit in Warsaw will build a deterrence force that should make Russia “forget about threatening Poland” and other nations, Poland’s defense minister said Monday.

Antoni Macierewicz spoke to The Associated Press just four days before about 2,000 delegates from the 28 NATO members and some partner nations meet to approve decisions to station a few thousand troops in Poland and the Baltic states. Their presence was requested by these countries, which are nervous about their security after Russia annexed Crimea from Ukraine in 2014 and started supporting separatists in eastern Ukraine.

“Only a show of real readiness to defend our borders can effectively halt Russia’s aggressive intentions,” Macierewicz said. “Russia must forget about threatening Poland, the European countries and other countries in the world.”

Poland and the three Baltic nations have a troubled history of ties with Moscow during the communist era and are especially sensitive to Russia’s moves. The Baltic states were under Moscow’s rule as parts of the Soviet Union until it fell apart in 1991, and Poland was a Moscow satellite until it shed communism in 1989. They joined NATO in 1999, but have not seen any military bases or significant forces of the alliance based on their territory until now, due to an agreement that NATO and Russia signed in 1997 when their ties were much better.

Sponsored Links
Do You Binge-Watch Documentaries? You’ll Love This Website
LA Times | Curiosity Stream
Forget Yoga Pants – These Are What You Should Be Wearing This Summer
American Giant | Refinery29
With the planned stationing of troops “we are becoming a full member of NATO,” Macierewicz said. “Not only a political one, but one that we have always very much wanted to be, one that the Poles have waited 70 years to be. We will be fully protected by a joint force.”

It is not clear how soon the troops and their equipment will be deployed. Each of the battalions will be under the command of a Western NATO member: the U.S., Britain, Germany and Canada. A separate U.S. brigade is also to be stationed in the region on NATO’s eastern flank, which borders the Russian exclave of Kaliningrad.

Leaders in Moscow have warned they will take steps in response, but have not specified what.

A die-hard dissident under communism, Macierewicz said “we can forget about fear” even though, he said, Russia is taking steps that are a threat to regional and wider peace, like the actions in Ukraine or moving troops and weapons on its own territory.