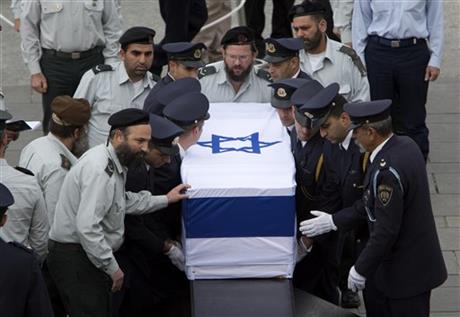 By ARON HELLER
Members of the Knesset guard carry the coffin of former Israeli Prime Minister Ariel Sharon at the Knesset plaza, in Jerusalem, Sunday, Jan. 12, 2014. Sharon, the hard-charging Israeli general and prime minister who was admired and hated for his battlefield exploits and ambitions to reshape the Middle East, died Saturday, eight years after a stroke left him in a coma from which he never awoke. He was 85. (AP Photo/Oded Balilty)
Ariel Sharon

A military vehicle with the coffin of the late Israeli Prime Minister Ariel Sharon heads to Jerusalem from a military base near Rishon Letzion in central Israel, Sunday, Jan. 12, 2014. The body of Ariel Sharon, Israel’s hard-charging former prime minister and general will be brought to Israel’s parliament building in Jerusalem where it will lie in state Sunday a day after his death aged 85. (AP Photo/Ariel Schalit)
Mideast Israel Ariel Sharon Obit

Workers prepare the gravesite for late Israeli Prime Minister Ariel Sharon, who will be buried next to his wife, outside his ranch in Havat Shikmim, southern Israel, Sunday, Jan. 12, 2014. A state memorial is planned for Monday with the participation of Israeli and world leaders, the prime minister’s office said. (AP Photo/Ariel Schalit)
Mideast Israel Obit Ariel Sharon

Members of the Knesset guard carry the coffin of former Israeli Prime Minister Ariel Sharon at the Knesset plaza, in Jerusalem, Sunday, Jan. 12, 2014. Sharon, the hard-charging Israeli general and prime minister who was admired and hated for his battlefield exploits and ambitions to reshape the Middle East, died Saturday, eight years after a stroke left him in a coma from which he never awoke. He was 85. (AP Photo/Oded Balilty)
Prev 1 of 5 Next

JERUSALEM (AP) — Hundreds of Israelis lined up outside Israel’s parliament building on Sunday to pay their last respects to Ariel Sharon, the hard-charging former prime minister and general who died over the weekend.

Sharon’s coffin was displayed in a plaza in front of the Knesset, where a stream of visitors passed by to snap photos and say farewell. A funeral service to be attended by dignitaries from around the world, including U.S. Vice President Joe Biden, is scheduled for Monday.

The 85-year-old Sharon, one of Israel’s most iconic and controversial figures, died Saturday, eight years after suffering a stroke that left him in a coma.

“My heart is broken. Israel lost the King of David. There is no other word to describe this man, they don’t make people like this anymore,” said Uri Rottman, a mourner who said he once served in the military with Sharon.

“I feel committed to share the very last moment before they’re going to bury him,” said Eliav Aviram, another former army comrade.

Sharon was a farmer-turned-soldier, a soldier-turned-politician, a politician-turned-statesman — a leader known for his exploits on the battlefield, masterminding Israel’s invasion of Lebanon, building Jewish settlements on war-won land and then, late in life, destroying some that he deemed no longer useful. To his supporters, he was a war hero. To his critics, he was a war criminal.

Israeli authorities closed off streets around the parliament in anticipation of huge crowds Sunday. Visitors were asked to park at lots in and around the city and were brought to the site by special buses.

President Shimon Peres and former Prime Minister Ehud Olmert, who succeeded Sharon after the 2006 stroke, was among the visitors. Olmert crossed past a roped-off area to stand silently next to the flag-draped coffin.

Afterward Sharon’s body will be taken by military convey for burial at his ranch in southern Israel.

News of Sharon dominated Israeli newspapers and broadcast reports, and Israel’s three main TV stations all broadcast live from the memorial. Radio stations were filled with interviews with former officials and military men who shared stories of Sharon’s exploits.

Sharon’s career stretched across much of Israel’s 65-year existence, and his life was closely intertwined with the country’s history.

Throughout his life, he was at the center of the most contentious episodes of the Israeli-Palestinian conflict, starting as a young soldier fighting in the 1948 war over Israel’s creation.

In the 1950s, he led a commando unit that carried out reprisals for Arab attacks. In 1953, after the slaying of an Israeli woman and her two children, Sharon’s troops blew up more than 40 houses in Qibya, a West Bank village then ruled by Jordan, killing 69 Arabs, most or all of them civilians.

Residents in Qibya on Sunday remembered the village’s darkest hour. Qibya resident Hamed Ghethan was just 4 years old when the raid took place. He said he could remember older residents placing their hands over the children’s mouths so they wouldn’t make a sound.

“Sharon’s name reminds me of… martyrs from my village,” said Ghethan, 65, as he surveyed the ruins of buildings destroyed in the military action.

As one of Israel’s most famous generals, he was known for bold tactics and an occasional refusal to obey orders.

Historians credit him with helping turn the tide of the 1973 Mideast war when Arab armies launched a surprise attack on Israel on the solemn fasting day of Yom Kippur, causing heavy Israeli casualties.

Sharon became a minister in Menachem Begin’s government in the late 1970s, and voted against the historic 1979 peace treaty with Egypt. But when it fell to Sharon to remove Jewish settlements from Egypt’s Sinai Peninsula, he obediently ordered protesting settlers to be dragged away and their homes bulldozed to rubble.

As defense minister in 1982, Sharon launched the invasion of Lebanon, where he became complicit in one of bloodiest incidents of the Lebanese war, when Israeli-allied forces systematically slaughtered hundreds of Palestinians in the Sabra and Chatilla refugee camps in September 1982. An Israeli judicial inquiry found Sharon indirectly responsible for the killings, and he was forced to step down as defense minister.

Yet over the years, he gradually rehabilitated himself by holding a number of Cabinet posts.

As opposition leader in September 2000, Sharon demonstratively visited a contested Jewish-Muslim holy site in Jerusalem, setting off Palestinian protests that quickly lurched into an armed uprising that ultimately killed hundreds of Palestinians and Israelis.

Several months later, he was elected prime minister. While Sharon ordered a tough crackdown on the Palestinian uprising, he made a dramatic about-face in 2003 when he announced his plans for a unilateral withdrawal from occupied lands.

In 2005, he directed a unilateral pullout of Israeli troops and settlers from the Gaza Strip, ending a 38-year occupation.

He later bolted from his hard-line Likud Party and established the centrist Kadima Party, with a platform promoting further territorial concessions and support for a Palestinian state alongside Israel.

It seemed he was on his way to an easy re-election when he suffered the stroke in January 2006.