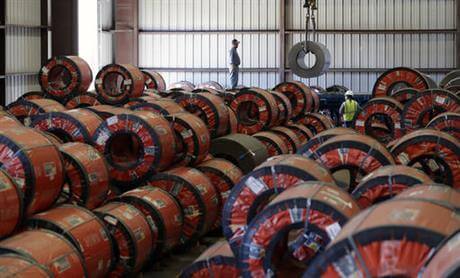 By PAUL J. WEBER
Donald Trump’s only visit to the U.S.-Mexico border while running for president was a stop in Laredo that lasted less than three hours. On some days, that’s not long enough for 18-wheelers hauling foreign-made dishwashers and car batteries to lurch through the gridlocked crossing.

Trump’s campaign promise to tear apart the North American Free Trade Agreement helped win over Rust Belt voters who felt left behind by globalization. But the idea is unnerving to many people in border cities such as Laredo and El Paso or Nogales in Arizona, which have boomed under the 1994 treaty.

“We are NAFTA on wheels,” Mayor Pete Saenz said.

Free trade across the border, he explained, is the “backbone” of this city of 255,000 people. The Democrat endured a backlash from his party for welcoming Trump in July 2015 after the then-candidate called immigrants from Mexico criminals and rapists.

Trump described NAFTA as “the worst single trade deal ever approved in this country.” That kind of talk resonated in hard-hit industrial towns such as Greenville, Michigan, where Electrolux shut down a factory a decade ago and moved jobs to the Mexican border city of Ciudad Juárez.

During his transition to the White House, the president-elect has not discussed NAFTA at all. The agreement went unmentioned in a video Trump released last month laying out the priorities for his first 100 days in office.

Saenz, the telegenic son of a dairy farmer, talks about the possible repeal of NAFTA like a small-town Midwest mayor trying to keep a factory from moving away. He foresees unemployment spiking to double digits, abandoned warehouses and crippled city finances. Laredo keeps the toll revenue from international bridge traffic, which last year amounted to about $60 million, enough, according to Saenz, to cover police and fire department payrolls.

His grim predictions are not widely shared. Even customs brokers in Laredo who have cashed in on NAFTA believe they will survive and trade will continue if the agreement is abandoned.

But for now, there’s still no better place in the U.S. to get a glimpse of the trade treaty than the Rio Grande city.

Interstate 35, clogged with wheezing 18-wheelers, starts here on its 1,600-mile straight shot to the Canadian border. Busy industrial parks are a revolving door of imported and exported goods. Four years after NAFTA was signed by President Bill Clinton and approved by a Republican-controlled Congress, the Census Bureau named Laredo the country’s second-fastest growing area.

At one time, denim makers thrived in Texas, and El Paso was considered the blue jean capital of the U.S. But those clothing manufacturers closed and the jobs went south.

Bill Hrncir, owner of LMS International, turned a small factory that once made Levi’s into a 200,000-square-foot distribution center. His warehouses are now stocked with coils of steel awaiting transport to Mexico.

Emilio Richer III, whose company has customs brokers and logistic-services offices up and down the U.S.-Mexico border, said ending NAFTA would be felt in his hometown of Laredo, but he does not think Trump is serious.

“I have it in the back of my head that he was being fed wrongful information,” and Trump was talking to people in other parts of the country, telling them “what they wanted to hear,” said Richer, whose vote for Trump was in the minority in heavily Democratic Webb County, which went 3-to-1 for Hillary Clinton.

Repealing or renegotiating the agreement could wallop Mexico, the United States’ largest trading partner. Most American economists do not believe NAFTA has a major effect on the nation’s overall job market.

Nor was NAFTA some high tide that lifted all boats, even in Texas. After NAFTA was adopted, $400,000 homes sprung up in Laredo. But beyond that wealth is widespread poverty in one of the nation’s poorest cities. The poverty rate in Laredo is 32 percent, among the highest in the nation, according to census figures. And 92 percent of students in the city’s public schools qualify as economically disadvantaged.

Warehouse jobs generally are not lucrative, with wages less than double the minimum wage of $7.25 an hour. At the South Texas Food Bank, just a few blocks behind Hrncir’s distribution center, Claudia Lira waited in the lobby for a box of food to take home.

She and her husband moved back to Laredo after he retired from a John Deere factory in Iowa. She didn’t know anything about NAFTA but, speaking in Spanish, theorized why the city has remained so persistently poor.

“A lack of jobs could be a factor,” she said. “There aren’t enough of them.”

This story has been corrected to show the Mexican border city is spelled Ciudad Juárez, not Ciduad Juarez.