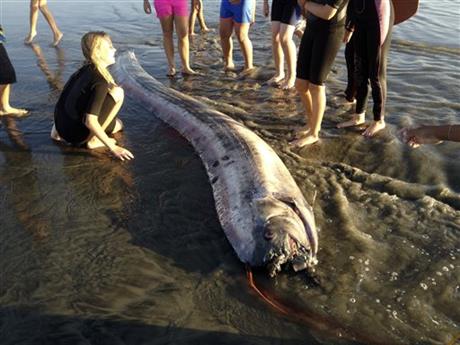 By ALICIA CHANG
This Friday Oct. 18, 2013 image provided by Mark Bussey shows an oarfish that washed up on the beach near Oceanside, Calif. This rare, snakelike oarfish measured nearly 14 feet long. According to the Catalina Island Marine Institute, oarfish can grow to more than 50 feet, making them the longest bony fish in the world. (AP Photo/Mark Bussey) MANDATORY CREDIT
LOS ANGELES (AP) — A 14-foot oarfish that washed ashore in Southern California last week was ready to become a mommy.

The serpent-like fish — one of two discovered along the coast last week — was dissected Monday and marine biologists found that the healthy female was ripe to spawn, H.J. Walker of the Scripps Institution of Oceanography said Tuesday.

The silvery fish’s 6-foot-long ovaries contained hundreds of thousands of eggs that were nearly ready to be released, Walker said.

The fish had lost its tail somehow while alive and it had disc-shaped wounds from cookiecutter sharks, but those injuries wouldn’t have been deadly, Walker said.

In fact, it’s unclear why the creature died, although Walker said it was possible the deep-water fish came too close to the surface, where it may have been knocked around by waves.

The oarfish washed up on a beach in the San Diego County coastal city of Oceanside on Friday. Several days earlier, a snorkeler found the carcass of an 18-foot oarfish off Catalina Island and dragged it to shore with some help.

The cause of death for the larger fish also remains a mystery.

The rarely seen deep sea-dwelling creatures, which can grow to more than 50 feet, may be the inspiration of sea monsters found in literature and throughout history. Photos of the oarfish have circulated widely online, spurring general interest in the mysterious creature but contributing little to scientists’ knowledge of the fish.

Here’s a closer look at the oarfish:

HOW OFTEN DO THEY VENTURE CLOSE TO SHORE?

Oarfish beach themselves around the world. Every so often, one wanders to the Southern California coast.

In 2010, a 12-foot oarfish washed ashore in Malibu. The most recent stranding before last week’s sightings occurred in 2011 when a 14-foot oarfish was found on a beach near the Vandenberg Air Force Base, about 130 miles northwest of Los Angeles, said Rick Feeney of the Natural History Museum of Los Angeles County.

HOW DID THE TWO OARFISH DIE?

While necropsies — the animal version of an autopsy — were done on the oarfish, the cause of death remains unknown. Scientists said the deaths may forever remain a mystery. The smaller oarfish appeared to be in good health before it died.

Oarfish are thought to be poor swimmers and it’s possible that the ones found last week got caught in a current that pushed them to coastal waters, marine experts said.

“If they get disoriented and into the surf zone, they’ll probably have trouble maneuvering back out to sea,” said Phil Hastings, curator of the marine vertebrate collection at the Scripps Institution of Oceanography.

WHY IS SO LITTLE KNOWN ABOUT OARFISH?

Oarfish are highly evolved. They tend to remain quiet in the deep ocean, luring smaller fish toward them.

They are found in tropical waters, generally from around 500 feet to 1,000 feet deep, although some may reach more than 3,000 feet deep. That means scientists don’t get many opportunities to study these serpent-like creatures. The dead oarfish that float ashore don’t tell the whole story. It’s like trying to study deer that end up in the windshield, said Milton Love, a marine biologist at the University of California, Santa Barbara.

“You wouldn’t know much about deer based on roadkill,” he said.

Scientists have dissected the oarfish, preserved some tissue and organs, and plan to send samples to researchers around the world to examine.