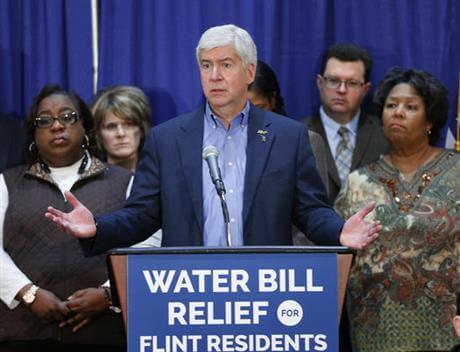 A lawsuit stemming from Flint’s lead-contaminated water was filed Monday on behalf of the city’s residents against Michigan Gov. Rick Snyder as well as other current and former government officials and corporations.

The federal lawsuit — which is seeking class-action status — alleges that tens of thousands of residents have suffered physical and economic injuries and damages. It argues officials failed to take action over “dangerous levels of lead” in drinking water and “downplayed the severity of the contamination” in the financially struggling city.

Snyder’s spokesman Ari Adler said the administration doesn’t comment on pending litigation, but is “staying focused on solutions for the people of Flint.”

Sponsored Links
8 Poisonous Foods We Commonly Eat
DailyHeathRemedies.com
The 11 Commandments of Retiring Early
The Motley Fool
Two recall petitions targeting Snyder over the water crisis have been approved. The latest was filed by a Flint activist and approved Monday by the Board of State Canvassers, the Detroit Free Press reported. The other recall petition, filed by a Detroit pastor, was approved last month.

Flint, with a population of about 100,000, had switched from Detroit’s water system to the Flint River as a way to save money until a new pipeline to Lake Huron was ready. But during those 18 months, the corrosive water leached lead from the city’s old plumbing because certain treatments weren’t added to the water.

Snyder, whose administration repeatedly downplayed the lead threat, now calls it a “disaster.”

A report by the state auditor general released Friday found that state environmental regulators made crucial errors as Flint began using the new drinking water source that would become contaminated with lead. It says staffers in the Department of Environmental Quality’s drinking water office failed to order the city to treat its water with anti-corrosion chemicals as it switched to the river in April 2014, but also said the rules they failed to heed may not be strong enough to protect the public.

The report came as crews in the city started to dig up old pipes connecting water mains to homes.

No level of lead in the human body is considered safe, especially in children. The river water also may have been a source of Legionnaires’ disease, which killed at least nine people in the region.