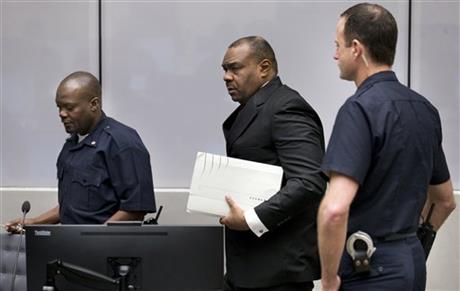 By MIKE CORDER
The International Criminal Court convicted a former Congolese vice president Monday of murder, rape and pillage committed by members of his militia in the Central African Republic in 2002-2003. The judgment was hailed as a landmark in the fight against impunity for sex crimes in conflict.

The unanimous conviction of Jean-Pierre Bemba marked the first time the court has convicted a suspect based on his role as a military commander. It also was the court’s first judgment recognizing rape as a war crime and crime against humanity.

Bemba, 53, is the highest-ranking person yet convicted by the court. He showed no emotion as Presiding Judge Sylvia Steiner read out the long judgment highlighting horrific crimes by his militia.

He will be sentenced following a separate hearing. His defense lawyers can appeal.

Sponsored Links
Getting One Of These 3 Cards Can Improve Your Credit
LendingTree
Come Enjoy The Beauty Of The Ozarks In Springfield Shopping
Springfield, MO
Presiding Judge Sylvia Steiner of Brazil outlined a litany of rapes by members of Bemba’s militia, the Movement for the Liberation of Congo, after it was deployed to Central African Republic to help forces loyal to then-President Ange-Feliz Patasse fight rebels led by Francois Bozize. Bozize’s forces ultimately won and he replaced Patasse as president.

Steiner said women, girls and men were targeted by Bemba’s forces, often with multiple soldiers raping women and girls in front of other family members.

In one incident, a man’s wife was gang raped and when he protested he, too, was raped at gunpoint.

Bemba was convicted even though he spent much of the conflict in the Democratic Republic of Congo. Even so, the three-judge panel said that he was able to communicate with his troops using radios, as well as satellite and mobile phones and also saw reports of their grave crimes in the media.

Steiner called what little action he did take to prevent or punish crimes by his forces “grossly inadequate.”

The convictions for rape as a war crime and crime against humanity will be a boost for the court’s Prosecutor Fatou Bensouda who has made the fight against sexual assault in conflict one of her priorities.

“This first guilty verdict at the ICC for sexual violence shines a spotlight on the use of rape as a weapon of war,” Geraldine Mattioli-Zeltner, international justice advocacy director at Human Rights Watch, said in a statement. “There is still a profound need for justice for these crimes and other atrocities in both the Central African Republic and the Democratic Republic of Congo, where Bemba is from and mainly operated.

“The ICC prosecutor should bring further cases against those who bear responsibility for the gravest crimes in these countries.”

Descartes Mponge, secretary general of Congolese rights group ACADHOSHA, said the judgment “strengthens the ICC’s its credibility in Africa where it is accused of bias and politicization.”