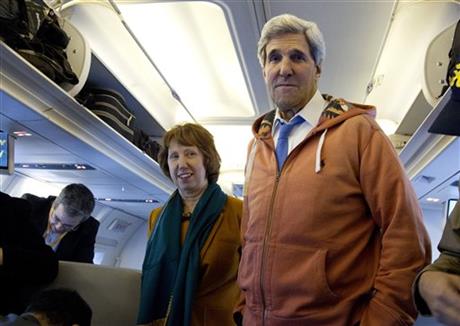 EU High Representative for Foreign Affairs and Security Policy Catherine Ashton, center, poses next to Iranian Foreign Minister Mohammad Javad Zarif, center right, and the Iranian delegation after a ceremony at the United Nations in Geneva, Switzerland, early Sunday, Nov. 24, 2013. Iran struck a historic deal Sunday with the United States and five other world powers, agreeing to a temporary freeze of its nuclear program in the most significant agreement between Washington and Tehran in more than three decades of estrangement. (AP Photo/Keystone,Martial Trezzini)
Hassan Rouhani

In this photo released by the official website of the office of the Iranian Presidency, Iran’s President Hassan Rouhani kisses the head of Armita, daughter of Iranian scientific researcher Darioush Rezaeinejad who was assassinated in July 2011, during a news briefing after Iran and world powers came to an agreement in Geneva over its nuclear program, at the Presidency compound in Tehran, Iran, Sunday, Nov. 24, 2013. Iran struck a historic deal Sunday with the United States and five other world powers, agreeing to a temporary freeze of its nuclear program in the most significant agreement between Washington and Tehran in more than three decades of estrangement. (AP Photo/Presidency Office, Mohammad Berno)
Prev 1 of 3 Next

WASHINGTON (AP) — Lawmakers from both parties said Sunday they are skeptical that Iran will stick to a new nuclear deal and want Congress to prepare beefed up economic penalties to hit Tehran if the accord falls apart.

In an early morning announcement, Tehran agreed Sunday to a six-month pause of its nuclear program while diplomats continue talks aimed at preventing Iran from developing a nuclear weapon. International observers are set to monitor Iran’s nuclear sites and ease about $7 billion of the crippling economic sanctions.

But the announcement, after months of secret face-to-face talks between the United States and Iran, left many U.S. lawmakers deeply doubtful of the most significant agreement between Washington and Tehran in more than three decades of estrangement. The chairman of the Senate Foreign Relations Committee, Democratic Sen. Bob Menendez of New Jersey, said Sunday he would work with colleagues to have sanctions against Iran ready “should the talks falter or Iran fail to implement or breach the interim agreement.”

Such distrust that Iran was negotiating in good faith ran across political parties that are otherwise deeply divided. And ready-to-go sanctions seemed to have rare bipartisan support across both of Congress’ chambers.

The House in July passed its latest round of sanctions against Iran with backing from both parties but the measure stalled in the Senate.

President Barack Obama convinced Senate leadership to hold off consideration of the measure while negotiators pursued an agreement. Senate Democratic leader Harry Reid of Nevada agreed to the request but said his chamber would take up new sanctions in December — with or without an agreement with Iran.

Sen. Chuck Schumer, a member of his party’s leadership team, said he was “disappointed” by the deal, which he called disproportional. The New York Democrat said sanctions forced Iran to negotiate and said he plans further discussions with colleagues.

“This agreement makes it more likely that Democrats and Republicans will join together and pass additional sanctions when we return in December,” Schumer said.

The Senate returns to session on Dec. 9 and lawmakers already were talking about sanctions designed to caution Iran that failure to use the six-month window to reach a deal would only leave Iranians in worse economic straits.

“Congress, I think, will want to make it clear that if Iran does not live up to these commitments, we will not only insist that the sanctions be reapplied, but we will have stronger sanctions against Iran,” said Sen. Ben Cardin, D-Md.

Added Sen. Marco Rubio, R-Fla.: “There is now an even more urgent need for Congress to increase sanctions until Iran completely abandons its enrichment and reprocessing capabilities.”

In the House, the No. 2 Democrat, Rep. Steny Hoyer of Maryland, said the threat of even tougher sanctions could help keep Iranian diplomats at the negotiating table for talks designed to prevent Tehran from being able to produce a nuclear weapon. Hoyer said he supports having the sanctions ready to go in case Iran proves an unreliable negotiating partner.

“It is appropriate that we wait six months to implement those, which will say to the Iranians: ‘We need a final deal, and if not a final deal, these tougher sanctions are going to go into place,'” Hoyer said.

Congress has been layering sanctions against Iran for years, crippling its economy and putting pressure on the nation’s middle class. Many of the economic penalties would remain in place during the six-month negotiating window, but lawmakers seemed to expect talks to collapse warrant new sanctions.

“If Iran does not consent to a comprehensive agreement that ensures it cannot acquire a nuclear weapon, there is a broad consensus in Congress to impose even tougher sanctions,” said Sen. Carl Levin, a Michigan Democrat who is chairman of the Senate Armed Services Committee.

A deep distrust of Iran pervaded Sunday’s discussion of the deal.

“We need to be very, very careful with the Iranians,” said Rep. Eliot Engel of New York, the top Democrat on the House Foreign Affairs Committee. “I don’t trust them, I don’t think we should trust them. …. Sanctions should always be hanging there because that’s what brought Iran to the table in the first place.”

“Iran has a history of obfuscation that demands verification of its activities and places the burden on the regime to prove it is upholding its obligations in good faith while a final deal is pursued,” he said.

Rep. Mike Rogers, the Michigan Republican who chairs the House intelligence panel, was more critical of a deal he said aids “the leading nation state of terror.”

“We have just rewarded very bad and dangerous behavior,” he said.

During interviews on Sunday, some lawmakers compared the current deal with the 1990s pact that gave North Korea a respite from sanctions if they promised to stop work on their nuclear program.

Added Sen. Saxby Chambliss, R-Ga.: “We’ve trusted the Iranians before, just like the North Koreans, on nuclear issues, and what have we gotten for it?”

Cardin and Corker spoke with “Fox News Sunday.” Hoyer was on CBS’ “Face the Nation.” Engel, Royce and Rogers appeared on CNN’s “State of the Union.” Chambliss joined ABC’s “This Week.”