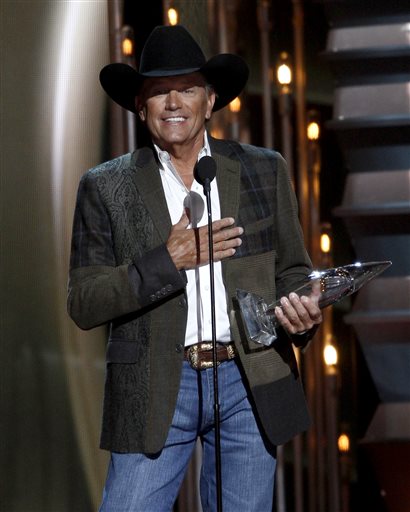 By CHRIS TALBOTT
George Strait accepts the award for entertainer of the year at the 47th annual CMA Awards at Bridgestone Arena on Wednesday, Nov. 6, 2013, in Nashville, Tenn. (Photo by Wade Payne/Invision/AP)
Blake Shelton

Blake Shelton accepts the award for male vocalist of the year at the 47th annual CMA Awards at Bridgestone Arena on Wednesday, Nov. 6, 2013, in Nashville, Tenn. (Photo by Wade Payne/Invision/AP)
Taylor Swift

Tyler Hubbard, right, and Brian Kelley, of Florida Georgia Line, accept the award for single of the year for “Cruise” at the 47th annual CMA Awards at Bridgestone Arena on Wednesday, Nov. 6, 2013, in Nashville, Tenn. (Photo by Wade Payne/Invision/AP)
Brad Paisley, Carrie Underwood

NASHVILLE, Tenn. (AP) — In a story Nov. 6 and 7 about The Country Music Association Awards, The Associated Press reported erroneously the name of the song George Strait and Alan Jackson sang in tribute to George Jones. The song’s title is “He Stopped Loving Her Today.”

A corrected version of the story is below:

NASHVILLE, Tenn. (AP) — The entertainer of the year trophy at the Country Music Association Awards is one of the most coveted honors in the genre, but sometimes it’s OK to lose — like, say, when George Strait is a nominee.

Strait won his third entertainer of the year award and his first since 1990 Wednesday night against country music’s current hitmakers, and there wasn’t a disappointed person in the house. Heck, Blake Shelton — one of five performers with a leading two victories — was excited to lose to the 61-year-old whose popularity defies his age.

“That’s how it needs to be because he’s not just entertainer of the year, he’s entertainer of the last three decades, I guess, or four decades,” Shelton said. “I don’t know who’s keeping score. I mean, it’s George Strait. He’s King George. I couldn’t be happier with how this turned out.”

Shelton was one of five top winners with two trophies apiece, along with Florida Georgia Line and the trio of Taylor Swift, Tim McGraw and Keith Urban, who won music video and music event of the year for their “Highway Don’t Care” collaboration. Like Strait, Swift also was going for her third entertainer of the year, which would have been a CMA record for a woman. Like Shelton, she couldn’t have cared less when she lost, instead hugging Faith Hill as they cried tears of joy for Strait. She noted they’ve both opened for Strait in their careers and she recounted a story about how Strait and his wife Norma dropped in to one of her first headlining concerts when she was a teenager just to wish her luck.

The crowd gave Strait a standing ovation as he made his way to the stage, and stayed standing throughout his speech — which by the usually reclusive Strait’s standards, was long. It wasn’t just a special night for those in the arena. It was also the show’s top trending moment on Facebook.

His retirement from the road has gained lots of attention, but Strait isn’t a relic. He remains relevant, recently earning his record 60th No. 1 and signing a five-album deal with Universal Music Nashville that will keep in making records.

Backstage he shared with reporters how it has felt as he circles the country on his The Cowboy Rides Away tour, his last.

“When I first started out this year, the first few shows, I about lost it every night, you know, leaving the stage … thinking, This might be the last time I ever play on this stage again,'” Strait said. He joked he had so much fun, “The cowboy might be riding in again.”

Strait’s victory capped a show that was simultaneously focused on the past, present and future.

It was the third straight year in which Lambert or Shelton were among the top winners, and capped a year in which they were dogged by tabloid stories about their relationship. Lambert said she wasn’t sure why the CMA’s 6,000 voters love the couple so much.

“You know, pillow talk, literally, we’re like, ‘Well, our year was last year,'” Lambert said. “It was great, a great run while we had it. We’ll drink tonight and celebrate all of our friends winning, because literally all of my friends won awards tonight. And that’s what’s great about country music because we are all friends. But I just thank everybody for really understanding that we’re real people and that every time they vote for us and that we stand up there on that stage it’s like it makes our life.”

Swift, who performed a somber, acoustic version of her hit “Red” with Vince Gill, Alison Krauss and Sam Bush, won her eighth and ninth CMA trophies before being honored with the association’s Pinnacle Award, given to an artist who has taken country to a worldwide audience.

The CMA brought a star-studded welcoming group out on stage for Swift that included Strait, Rascal Flatts, McGraw and Hill, Urban and Brad Paisley — all of whom gave Swift a chance to open for them on the road a teenager. A video salute followed with appearances by Justin Timberlake, Julia Roberts, Carly Simon, Ethel Kennedy and Mick Jagger — whose appearance made Swift shout.

“You’ve made me feel so special right now, thank you,” Swift said.

Voters also cast an eye to the future, handing trophies to young stars Florida Georgia Line and Kacey Musgraves, who was a top nominee with Swift.

Florida Georgia Line’s Tyler Hubbard and Brian Kelley scored single and vocal duo of the year. Their quick wins early in the show was more proof the so-called bro country movement is the sound of the moment in mainstream country. FGL kicked off the show performing a fist-pumping medley with Luke Bryan, and very quickly returned to the stage to take the trophy for single of the year for their “Cruise” remix featuring Nelly. They also played the new song “Round Here.”

“It’s been a constant thing all year — we’ve been trying to wrap our minds around what’s going on,” Hubbard said of the band’s platinum success backstage. “It’s been a dream come true for us and a huge blessing for us and something we could have never imagined.”

Musgraves won the new artist trophy, besting a field that included Florida Georgia Line. With smart songwriting, a progressive bent and a strong sense of self like country’s other top women, Musgraves made an auspicious mainstream country debut this year with her album “Same Trailer Different Park.” She attended with her grandmother.

“It’s amazing what 52 weeks can do to a person,” Musgraves said backstage. “… Last year I had really crappy seats. You know, I was just sitting back with my roommate just as a fan. And here I am holding this thing.”

Lee Brice’s “I’d Drive Your Truck,” about a fallen soldier whose father still drives his truck, won song of the year, and Little Big Town took its second straight vocal group of the year.

Collaboration was the theme of the night as Strait and Alan Jackson joined together to salute the late George Jones with a rendition of “He Stopped Loving Her Today.” Hunter Hayes and Jason Mraz took a tour of the Bridgestone Arena while performing “Everybody’s Got Somebody But Me.” And Zac Brown and his band joined in on a growing hard-rock trend in country as Foo Fighter Dave Grohl played drums for new high-powered song “Day for the Dead.” Eric Church earlier turned things up to 11 with his new song “The Outsiders.” And in one of the night’s most anticipated moments, Kenny Rogers received the CMA’s Willie Nelson lifetime achievement award and was saluted by Jennifer Nettles, Rucker and Rascal Flatts.