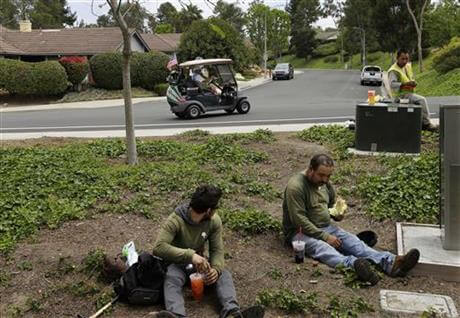 By The Associated Press
A woman sleeps in her car, waiting to receive free dental care at a clinic in rural Virginia. Another peers though a fence at the Mexican border to see the grandmother she left behind 18 years before, when she was brought to the United States as a toddler.

Health care and immigration are two of the most contentious issues of this most contentious election year, but they are not merely grist for politics and politicians. Americans like these women, Lesia Crigger and Eva Lara, are dealing with them in nearly every moment of their everyday lives.

A team of Associated Press photographers traversed the country to record those moments. Each set out to capture a single, intimate image to illustrate the human side of immigration, the economy, the environment, gun rights, social values like abortion, gay rights and conservative Christian beliefs, and race.

The result: A mosaic of a people at a singular time, struggling to extend the American project through the treacherous shoals of the 21st century.

EDITOR’S NOTE — This story is part of Divided America, AP’s ongoing exploration of the economic, social and political divisions in American society.