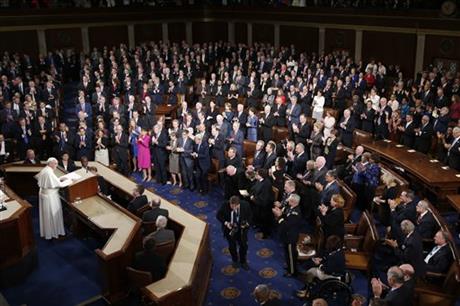 By MATTHEW DALY
In a chaotic year, when Republicans in the House unseated a speaker, Congress produced a significant amount of bipartisan legislation that affects every American.

Highlights of an eventful year in Congress:

Sponsored Links
Get Started with Desk.com & Jumpstart Your Customer Service [eBook]
Desk.com
The Best Suit You’ll Ever Have For The Best Price
Indochino
BUDGET DEAL

A $1.1 trillion spending bill approved Friday funds the government for the 2016 budget year and extends $680 billion in tax cuts for businesses and individuals. The deal — a victory for new House Speaker Paul Ryan, R-Wis. — avoids a government shutdown, allows crude oil exports for the first time in 40 years and extends a huge variety of tax breaks, including those for college tuition and renewable energy such as solar and wind power.

Obama signed a sweeping overhaul of the No Child Left Behind education law, the biggest education reform since 2002. The bipartisan law ushers in a new approach to accountability, teacher evaluations and the way the most poorly performing schools are pushed to improve. Students will still take federally required statewide reading and math exams, but the law encourages states to limit time spent on testing and diminishes the stakes for underperforming schools.

After years of stymied efforts, Congress approved a bipartisan bill to improve the nation’s aging and congested highways and transit systems. The new law assures states that federal help will be available for major projects, although it does not resolve how to pay for transportation programs in the long term.

Congress approved a bill granting the president trade promotion authority. The law allows Congress to ratify or reject trade agreements negotiated by the executive branch, but not change or filibuster them. Obama has not submitted to Congress a recently competed trade agreement with 11 Pacific Rim nations.

Obama signed into law the USA Freedom Act, which extends three expiring surveillance provisions of the USA Patriot Act, passed after the 9/11 attacks on New York and Washington. The law overhauls the previous law’s most controversial provision, which had been interpreted to allow bulk collection of U.S. phone records by the National Security Agency. The new law gives private companies more leeway to publicly report information about the number of national security surveillance demands they receive.

Congress approved a sweeping defense-authorization bill that includes a troop pay raise and prohibits transfer of Guantanamo Bay detainees to the United States.

Despite those accomplishments, the Republican-controlled Congress failed on a number of fronts:

GOP lawmakers were unable to block a deal involving the United States, Iran and five other world powers that would curb Iran’s nuclear activities in exchange for giving Iran access to billions in frozen assets and oil revenue.

Congress did not block Obama administration regulations on clean air and water and was unable to stop Obama’s signature environmental accomplishment, a high-profile plan to curb greenhouse gas emissions from coal-fired power plants.

Despite many attempts, Congress again failed to win approval for the Keystone XL oil pipeline from Canada. Obama finally rejected the pipeline last month after seven years of indecision.