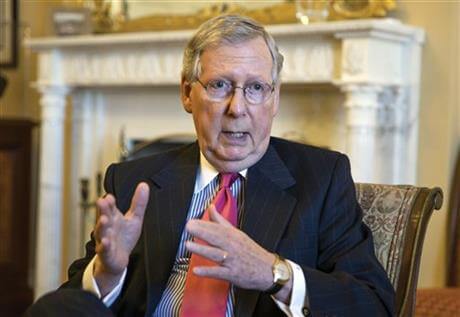 It was the first year of Barack Obama’s two presidential terms when the GOP ran both the House and Senate. That meant a blend of compromise and confrontation. Each side won some priorities and blocked the others’, a hallmark of divided government.

Republican infighting overshadowed everything for most of the year. Even interventions from on high — a first-ever papal address to Congress by Pope Francis and a Florida man’s unauthorized landing of a gyrocopter near the Capitol — barely distracted from the GOP upheaval.

“There were a number of procedural snafus and dysfunctional moments that made this year much more difficult,” said moderate Rep. Charlie Dent, R-Pa.

“The Republican Senate majority is proving that you can still get a lot done with a president from a different party,” Senate Majority Leader Mitch McConnell, R-Ky., said Saturday in his party’s weekly address.

Obama, in in his weekly address, said the 11th-hour spending and tax bills he signed were “a pair of Christmas miracles in Washington.”

Some of the year’s turmoil flowed from the GOP’s presidential campaign, in which Donald Trump and others have profited by targeting the political establishment. It was bad enough when Sen. Ted Cruz, R-Texas, one White House candidate, took to the Senate floor to accuse his McConnell, his own party’s chief, of telling him “a flat-out lie” about scheduling a controversial vote.

Plenty of GOP senators defended McConnell, but things got worse.

At the eye of the Republican maelstrom was the House Freedom Caucus, numbering about 40 hard-right lawmakers. They made Boehner’s life miserable because they felt he didn’t challenge Obama enough.

In an early sign of trouble, 25 conservative Republicans cast symbolic votes last January against making Boehner speaker, a job he had held since 2011.

The following month, 52 of them abandoned GOP leaders and joined Democrats to oppose a bill financing the Homeland Security Department. They were angry that the measure did not curb Obama’s immigration policies. In a symbolic warning, conservative Rep. Mark Meadows, R-N.C., proposed ousting Boehner in July with a nonbinding motion accusing Boehner of “diminishing the voice of the American people.”

So deep were the GOP divisions that Republican perspectives on 2015 depended on who was asked.

For many Republicans, major accomplishments were partly measured by what did not happen.

A chief goal that Boehner and McConnell attained was preventing battles with Obama from escalating into a government shutdown or federal default — fights viewed as unwinnable and potentially damaging for the GOP in the 2016 elections.

“Our heroic accomplishments ought to be routine,” said Rep. Jerrold Nadler, D-N.Y.

But neither was 2015 a picnic for Democrats.

It began inauspiciously on New Year’s Day when their Senate leader, Harry Reid of Nevada, lost the sight in his right eye in an exercise accident. Several Democratic priorities went nowhere by year’s end, including eased immigration restrictions and — despite more mass shootings — tightened gun curbs.

Ryan, aided by compromises Boehner struck with Democrats before leaving Congress, capped the year by steering budget and tax bills through the House. That cheered many Republicans, but conservatives said they will be watching.

“Paul inherited this and I think we’ve got to give him some grace on it,” conservative Rep. Gary Palmer, R-Ala., said of the year-end budget work. “I think after the first of the year, though, what we do from that point on, he owns it.”