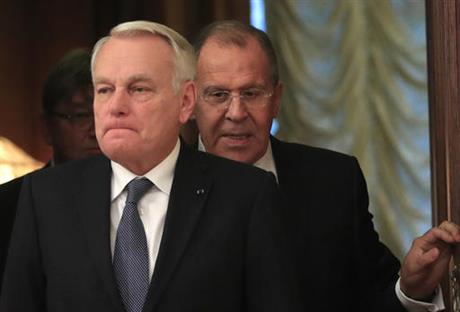 France’s foreign minister is calling on the International Criminal Court to investigate Russia for possible war crimes in Syria.

Jean-Marc Ayrault told France-Inter radio Monday that “France intends to get in touch with the prosecutor to find out how the probe can be launched.”

Ayrault says France disagrees with Russia’s “bombarding” of Aleppo and “is committed as never before to saving the population.”

He says the investigation would hinge on Moscow’s role in the aerial offensive in the rebel-held eastern part of the city.

by TaboolaMore from AP
Kuwait arrests Egyptian after failed attack on US soldiers
US forces increasing Iraq footprint ahead of Mosul operation
Russia on Saturday blocked a U.N. Security Council resolution proposed by France and Spain on ending the hostilities.

On Friday, U.S. Secretary of State John Kerry called for a war crimes investigation into Russian and Syrian airstrikes in Syria, an appeal Russia has angrily rejected.