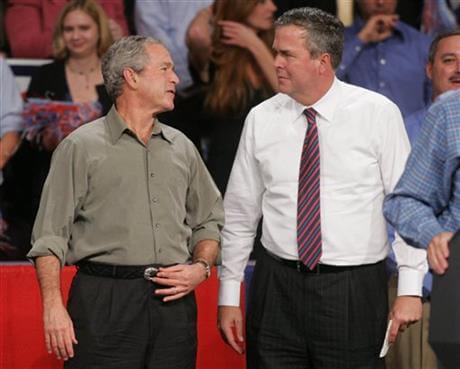 By BILL BARROW and SERGIO BUSTOS
George W. Bush won a bruising South Carolina presidential primary on his way to the Oval Office, as his father did before him.

Now it’s his brother’s turn, and for Jeb Bush, the most consequential foreign policy decisions of his brother’s time in office are suddenly front-and-center of his bid to keep alive his campaign for the Republican presidential nomination — thanks to Donald Trump.

The former president had already announced plans to campaign for his younger brother on Monday in South Carolina, marking his most direct entry into the 2016 race to date, when the GOP front-runner used the final debate before the state’s Feb. 20 primary as an opportunity to excoriate George W. Bush’s performance as commander-in-chief.

The former president, Trump said, ignored “the advice of his CIA” and “destabilized the Middle East” by invading Iraq on dubious claims that Saddam Hussein had weapons of mass destruction.

Sponsored Links
Deciding Which CRM Solution is Right For Your Small Business [E-Book]
Salesforce
10 Body Language Mistakes You Didn’t Realize You Were Making
Forbes
“I want to tell you: they lied,” Trump said. “They said there were weapons of mass destruction, there were none. And they knew there were none.”

Trump didn’t let up as Bush tried to defend his brother, dismissing his suggestion that George W. Bush built a “security apparatus to keep us safe” after the 9/11 attacks.

“The World Trade Center came down during your brother’s reign, remember that,” Trump said, adding: “That’s not keeping us safe.”

The onslaught — which Jeb Bush called Trump enjoying “blood sport” — was the latest example of the billionaire businessman’s penchant for mocking his rival as a weak, privileged tool of the Republican Party establishment, special interests and well-heeled donors.

But the exchange also highlighted the former Florida governor’s embrace of his family name and history as he jockeys with Florida Sen. Marco Rubio and Ohio Gov. John Kasich to emerge from South Carolina as the clear challenger to Trump, who won the New Hampshire primary, and Texas Sen. Ted Cruz, the victor in Iowa’s caucuses.

The approach tacks away from Bush’s months-long insistence that he’s running as “my own man,” but could be a perfect fit for South Carolina. Noted South Carolina Sen. Lindsey Graham, who ended his GOP presidential campaign in December and endorsed Jeb Bush in January, said: “The Bush name is golden in my state.”

George W. Bush retains wide appeal among Republicans, from evangelicals to chamber of commerce business leaders and retired members of the military. All are prominent in South Carolina, with Bush campaign aide Brett Foster going so far as to say that George W. Bush is “the most popular Republican alive.”

After the debate, some Republicans again suggested Trump had gone too far. Bush wasn’t alone on stage leaping to his brother’s defense, with Rubio coming back to the moment to say, “I thank God all the time it was George W. Bush in the White House on 9/11 and not Al Gore.”

The attack on George W. Bush carries risk for Trump, given the Bush family’s long social and political ties in South Carolina and the state’s hawkish national security bent, bolstered by more than a half-dozen military installations and a sizable population of veterans who choose to retire in the state.

Trump has repeatedly defied predictions that his comments might threaten his perch atop the field. And as he jousted Saturday with Trump, Jeb Bush said, “this is not about my family or his family.”

But the Bush family does have a history in the state that’s hard to overlook. In 2000, George W. Bush beat John McCain in a nasty contest, marred by rumors that McCain had an illegitimate black child. McCain adopted a child from Bangladesh. Exit polls showed George W. Bush won nearly every demographic group.

Yet even as he defended his brother’s presidency at Saturday’s debate, Jeb Bush found a way to distance himself from George W. Bush’s business affairs and to criticize Trump at the same time. The issue: eminent domain.

Before entering politics, George W. Bush was part-owner of the Texas Rangers, and their home city of Arlington, Texas, used eminent domain to take private land and build a stadium for the team. Trump has defended such uses of eminent domain as a way to foster economic development.

Retorted Bush, who argued eminent domain should be reserved for public infrastructure projects, “There is all sorts of intrigue about where I disagree with my brother. There would be one right there.”