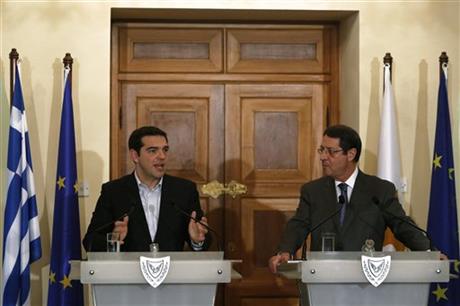 By MENELAOS HADJICOSTIS
Instead of issuing threats, Turkey must respect Cyprus’ right to search for offshore gas so suspended talks to reunify the ethnically divided island can resume, Greece’s prime minister said Monday.

Prime Minister Alexis Tsipras said Turkey’s dispatch of a research vessel to search for gas in waters where the Cypriot government has licensed other companies to drill is a “gross violation of international law” that undermines a return to the peace talks.

Tsipras told the Cypriot parliament in a special session that peace talks “cannot carry on under a regime of provocations and threats” that can “neither be ignored nor rewarded by the international community.”

Cypriot President Nicos Anastasiades broke off the talks in October after Turkey said it would send the vessel.

Cyprus was split in 1974 when Turkey invaded after a coup aiming for union with Greece. Turkey doesn’t recognize Cyprus as a state and says it won’t allow a unilateral Greek Cypriot gas search that it says flouts Turkish Cypriot rights.

A Turkish Cypriot declaration of independence in the island’s northern third is recognized only by Ankara, which maintains 35,000 troops there.

“Our main message to Ankara is the need to uphold international law, especially in an unstable region,” said Tsipras.

Anastasiades said at a dinner in honor of Tsipras that he won’t be pressured into talks and into accepting a peace accord “dictated by military might.”

He repeated, however, that any potential mineral wealth is a powerful incentive for peace and it will be shared by all Cypriots after a reunification deal.