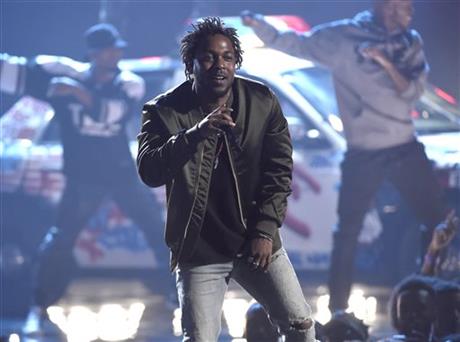 By MESFIN FEKADU
Kendrick Lamar is the king of the Grammys: The rapper is the leading nominee for the 2016 awards with 11, including album of the year for “To Pimp a Butterfly” and song of the year for “Alright.”

Lamar, who won two Grammys earlier this year, is followed by Taylor Swift and the Weeknd, who each earned seven nominations, including album of the year. “Butterfly,” ”1989″ and “Beauty Behind the Madness” will battle country singer-songwriter Chris Stapleton’s “Traveller” and rock group Alabama Shakes’ “Sound & Color” for the top prize.

“Thinking out Loud” and “Blank Space,” which reached No. 1 on the Billboard Hot 100 chart, are also nominated for record of the year, pitting the songs against No.1 hits that include Mark Ronson and Bruno Mars’ “Uptown Funk” and the Weeknd’s “Can’t Feel My Face,” as well as a wild card: “Really Love” from R&B singer D’Angelo and the Vanguard.

“There’s a broad spectrum and certainly it shows there’s been quite a bit of wonderful and excellent recordings in the last year,” Recording Academy CEO Neil Portow said in an interview with The Associated Press.

“It’s a testimony to his artistry,” Portnow said of Lamar. “He’s someone that’s very serious about his art and about his craft, and has been working it for quite some time. And this is one of those instances where the work pays off.”

Swift, who won album of the year with “Fearless” in 2010 and earned a nomination in the top category with “Red,” is also up for best pop vocal album for her top-selling “1989” and pop solo performance for “Blank Space.” The Weeknd’s nominations include best pop solo performance for “Can’t Feel My Face” and urban contemporary album for “Beauty.” His hit from the “Fifty Shades of Grey” soundtrack — “Earned It” — garnered nominations for best R&B performance, R&B song and song written for visual media.

The film’s soundtrack, which also featured the Ellie Goulding hit “Love Me Like You Do,” is up for best compilation soundtrack for visual media along with “Empire: Season 1,” which debuted at No. 1 on the Billboard charts earlier this year.

More than 21,000 submissions were entered for the 83 Grammy categories, with the first round of votes due by Nov. 4 — the day the Country Music Association Awards aired and Stapleton cleaned house and turned in a memorable performance alongside Justin Timberlake. In addition to album of the year, Stapleton’s “Traveller” is nominated for best country album, country song and country solo performance.

Garth Brooks, who marked a comeback after 13 years last year, was surprisingly shut out of the country categories. Despite success with tours, albums and singles, Luke Bryan was also snubbed and has yet to earn a Grammy nomination.

Alabama Shakes, fronted by singer Brittany Howard, debuted at No. 1 on the Billboard charts with “Sound & Color” earlier this year, and the album was met with critical acclaim — much like the band’s 2012 debut, “Boys & Girls.” Their four nominations include best alternative music album as well as best rock performance and song for “Don’t Wanna Fight.”

Pharrell and West are also nominated for four awards, including album of the year for producing songs on Lamar’s album. West’s nominations include best rap song and rap performance for “All Day,” which featured Paul McCartney and earned the icon two rap nominations.

Justin Bieber — who marked a comeback this year with the hits “Sorry” and “What Do You Mean” — is nominated for best dance recording for his other hit, “Where Are U Now” with Skrillex and Diplo. Both Bieber and Adele’s new albums will qualify for Grammy nominations next year since they were released after Sept. 30 — the final day for eligibility this year.

The 58th Grammys will air live on February 15, 2016, from the Staples Center in Los Angeles. Voting for the second round, completed by mail and starting next week, ends on January 15, 2016.