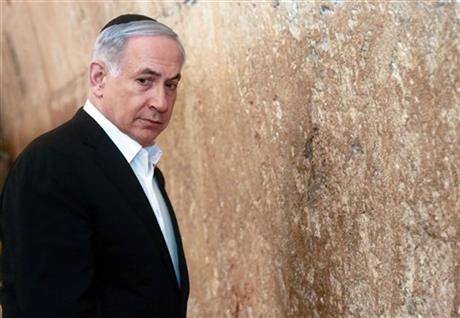 By BRADLEY KLAPPER
Secretary of State John Kerry on Sunday tried to calm tensions with Israel before Prime Minister Benjamin Netanyahu’s congressional address, yet insisted the Obama administration’s diplomatic record with Iran entitles the U.S. to “the benefit of the doubt” as negotiators work toward a long-term nuclear deal.

Kerry said in an interview broadcast before he left for more talks in Switzerland with Iran’s foreign minister that Netanyahu was welcome to speak in the U.S. and that the administration did not want the event “turned into some great political football.”

That sentiment was a step back from some of the sharp rhetoric between the allies in recent weeks, and Kerry mentioned that he talked to Netanyahu as recently as Saturday.

But Kerry stressed that Israel was safer as a result of the short-term nuclear pact that world powers and Iran reached in late 2013, and he described that improvement as the “standard we will apply to any agreement” with the Islamic Republic.

Officials have described the United States, Europe, Russia and China as considering a compromise that would see Iran’s nuclear activities severely curtailed for at least a decade, with the restrictions and U.S. and Western economic penalties eased in the final years of a deal.

“We are going to test whether or not diplomacy can prevent this weapon from being created, so you don’t have to turn to additional measures including the possibility of a military confrontation,” Kerry told ABC’s “This Week.”

“Our hope is that diplomacy can work. And I believe, given our success of the interim agreement, we deserve the benefit of the doubt to find out whether or not we can get a similarly good agreement with respect to the future.”

Netanyahu, set to arrive in Washington later Sunday, will press his opposition to a diplomatic accommodation of Iran’s program in a speech Tuesday to Congress. The prime minister says he is making the address out of concern of Israel’s security.

The invitation by House Speaker John Boehner, R-Ohio, and Netanyahu’s acceptance have caused an uproar that has exposed tensions between Israel and the U.S., its most important ally.

By consenting to speak, Netanyahu angered the White House, which was not consulted with in advance, and Democrats, who were forced to choose between showing support for Israel and backing the president.

“I will do everything in my ability to secure our future,” Netanyahu said before flying to Washington. He described himself as “an emissary” of the Jewish people.

Boehner said Iran’s nuclear ambitions were a threat well beyond the region.

“We’re not going to resolve this issue by sticking our heads in the sand,” Boehner told CBS’ “Face the Nation.”

He said Netanyahu “can talk about this threat, I believe, better than anyone. And the United States Congress wants to hear from him, and so do the American people.”

The congressional speech also has sparked criticism in Israel, where Netanyahu is seeking re-election on March 17. He also planned to speak Monday at the annual conference of the pro-Israel lobby AIPAC.

Netanyahu considers unacceptable any deal that does not entirely end Iran’s nuclear program. But President Barack Obama is willing to leave some nuclear activity intact, backed by safeguards that Iran is not trying to develop a weapon. Iran insists its program is solely for peaceful energy and medical research purposes.

The dispute has become more personal of late.

On Sunday, Kerry painted a more positive picture of continued close cooperation. He said the U.S.-Israeli security partnership was closer than at any point before, and noted the large investment of American money in the Jewish state’s Iron Dome missile defense system.

He said the U.S. government has “intervened on Israel’s behalf in the last two years a couple of hundred of times” in more than 75 forums “in order to protect Israel.”