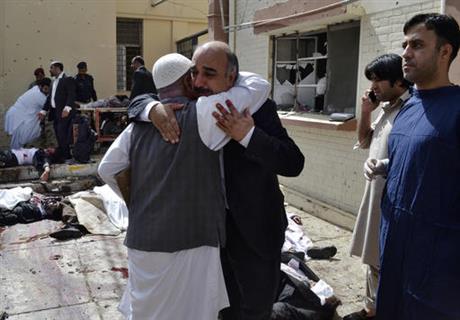 In a statement, Ahsanullah Ahsan, spokesman for Jamaat-ul-Ahrar militant group, also said their men killed Bilal Kasi, the president of Baluchistan Bar Association, and then targeted the mourners who had gathered at the government-run Civil Hospital. The group has been behind several acts of terrorism in Pakistan in recent years. The claim could not be independently verified.

by TaboolaMore from AP
Expert to Rio athletes: ‘Don’t put your head under water’
A star rises from poverty, is killed defying Pakistan norms
___

A Pakistani doctor says the death toll from the suicide attack on a hospital in the southwestern city of Quetta has further increased to 63.

Abdul Rehman, the director of the Quetta Civil Hospital, says they are also treating 92 wounded people following the explosion at the state-run hospital.

He says most of the victims of the bombing are lawyers. No group has so far claimed responsibility for the attack in the Baluchistan provincial capital.

Pakistani police say a suicide bomber carried out the attack at the government-run hospital in the southwestern city of Quetta that killed 53 people and wounded dozens.

Senior police officer Zahoor Ahmed Afridi says bomb disposal experts have informed him that remains of the attacker have been found at the scene after Monday’s bombing.

Ali Zafar, the top leader of Pakistan’s main lawyers’ association, denounced the bombing as “an attack on justice.” He said lawyers across the country will observe three days of mourning and will stay away from court appointments to express solidarity with those killed in the attack.

A Pakistani man who survived the bombing of a hospital in the southwestern city of Quetta has described a horrifying scene, saying there were “bodies everywhere” after the blast.

Waliur Rehman says he was taking his ailing father to the hospital’s emergency ward when the explosion shook the building on Monday. He says the blast was so powerful that they both fell down.

Rehman says when he looked up he saw bodies of the dead and the wounding crying out for help. He says he believes he was about 200 meters (yards) away from the emergency department where the bomb struck.

Lawyer Abdul Latif says he arrived at the hospital to express his grief after hearing that a senior Quetta lawyer, Bilal Kasi, had been shot and killed by gunmen earlier in the day.

But he says he didn’t know he will “see the bodies of dozens of other lawyers” killed and wounded at the hospital.

A Pakistani surgeon at the hospital struck by a huge bombing in the southwestern city of Quetta says the death toll there has jumped to 53.

Noor Ahmed, a deputy chief surgeon for victims of violent crime, says the hospital is also treating about 50 people who were wounded in the bombing on Monday.

There has still been no claim of responsibility for the attack at the government-run hospital. Quetta is the capital of southwestern Baluchistan province, which has witnessed deadly attacks in recent years.

Pakistani police have raised the death toll from a hospital bombing in the southwestern city of Quetta and are now saying that there are 42 killed.

No group has immediately claimed responsibility for Monday’s attack.

Senior police official Zahoor Ahmed Afridi says the bomb went off shortly after the body of a prominent lawyer killed earlier in the day was brought to the hospital.

Sanaullah Zehri, the chief minister in Baluchistan province, where Quetta is the capital, says it seemed to be a suicide attack but that the police are still investing.

Pakistan’s prime minister has denounced the huge bombing that struck a hospital in the southwestern city of Quetta, killing 30.

Nawaz Sharif issued a statement expressing his “deep grief and anguish over the loss of precious human lives” in Monday’s attack.

He instructed local authorities in Baluchistan province, where Quetta is the capital, to maintain utmost vigilance and beef up security. Sharif also asked health workers to provide the best treatment possible to those wounded in the attack.

Sharif added that “no one will be allowed to disturb the peace,” which “countless sacrifices” by the “security forces, police and the people of Baluchistan” have worked so hard to restore.

Pakistani police have raised the death toll from the bombing on the grounds of a government-run hospital in the southwestern city of Quetta to 30 killed.

Senior police official Zahoor Ahmed says also that dozens have been wounded in the explosion. The blast took place shortly after the body of a lawyer killed in a shooting attack earlier in the day was brought in on Monday.

No one immediately claimed responsibility for the attack.

Pakistani police say a bomb has exploded at a government-run hospital in the southwestern city of Quetta, killing at least six people.

Police official Afzal Khan says several people were also wounded in Monday’s blast, which took place shortly after the body of a prominent lawyer killed in a shooting attack earlier in the day was brought to the hospital.

Khan says dozens of lawyers and journalists were present inside the hospital when the bomb went off. No one immediately claimed responsibility for the attack.

It was also unknown who was behind the killing of the lawyer, Bilal Kasi, who was gunned down on his way to court earlier in the day.