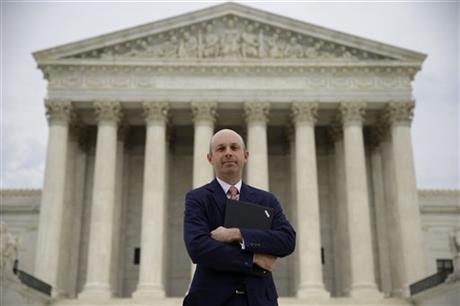 By MARK SHERMAN
Tom Goldstein, who writes SCOTUSblog.com, poses for a photograph in front of the Supreme Court, Thursday, Oct. 31, 2013, in Washington. The court’s justices themselves read the award-winning SCOTUSblog, but unlike other media it has no official status in the marble courthouse. (AP Photo/Alex Brandon)
Tom Goldstein

Tom Goldstein, who writes SCOTUSblog.com, poses for a photograph in front of the Supreme Court, Thursday, Oct. 31, 2013, in Washington. The court’s justices themselves read the award-winning SCOTUSblog, but unlike other media it has no official status in the marble courthouse. (AP Photo/Alex Brandon)

WASHINGTON (AP) — One of the most influential news outlets covering the Supreme Court sets up shop on big decision days not in the pressroom with other reporters, but in the court’s cafeteria.

The justices themselves read the award-winning SCOTUSblog, but unlike other media it has no official status in the marble courthouse.

This curious situation is attributable almost entirely to the unusual, if not unique, circumstances that surround SCOTUSblog publisher Tom Goldstein. The 43-year-old lawyer has made a career out of challenging the established way of doing things, first among Supreme Court advocates and more recently in its pressroom.

Goldstein is in the position of both making and reporting the news.

He is not just the founder, owner and publisher of SCOTUSblog, named for the acronym for the Supreme Court of the United States. He also argues before the court, comments on and analyzes news on MSNBC and is quoted widely in media accounts.

SCOTUSblog has gone from a failed marketing ploy designed to attract more business to the law firm Goldstein started with his wife, Amy Howe, to an indispensable aid to Supreme Court reporters and lawyers. The blog’s Twitter account has 144,000 followers.

The blog is so popular among Supreme Court watchers that it is now helping set the agenda for coverage of the institution.

SCOTUSblog tries to steer clear of conflicts by routinely acknowledging when Goldstein’s firm is involved in cases the blog writes about. But the court itself is unsure how to deal with this hybrid that Goldstein created, a news outlet that is owned by one of the court’s own practitioners.

He wears, in his own words, “so many hats” around the court that it is hard sometimes to distinguish one from another. The blog has been reporting extensively on the cases the court has heard this term. Out of the 18 cases heard so far, two were argued by Goldstein, including one last week, and another by law firm partner Kevin Russell, also a SCOTUSblog contributor.

Howe, a lawyer who has argued before the court, now is a reporter and editor for the blog. So far this term, she has watched some arguments from seats reserved for lawyers, then written about cases for the blog.

When the justices heard arguments over gay marriage in March, Goldstein listened to them in a room set aside for lawyers, then updated the blog’s followers on Twitter.

Of all the media organizations with a presence at the high court, including The Associated Press, SCOTUSblog is the only one owned by a lawyer.

Goldstein said he wants SCOTUSblog to be treated like any other news organization. “We ought to be given the same benefits and be subject to the same restrictions as members of the press corps.”

Yet he also acknowledged that his peculiar status means that he and the blog sometimes do not act the way other organizations would, including notifying the court when it inadvertently posts orders or opinions online before they are officially released.

That caution is in contrast to Goldstein’s penchant for taking risks on other fronts.

He forecast that Elena Kagan would replace John Paul Stevens well before Stevens announced his retirement. But he also incorrectly predicted the demise of the health care overhaul in 2012. “I would say the administration is probably not going to have the best June,” Goldstein told Jon Stewart on Comedy Central’s “The Daily Show”.

Perhaps his biggest gamble was his effort to build a Supreme Court practice from scratch.

Many lawyers who argue regularly at the Supreme Court attended an Ivy League law school, served as a justice’s law clerk and worked in the Justice Department’s Office of the Solicitor General. Goldstein had none of those advantages when he set out to build a law practice focused on the Supreme Court.

Instead, he looked systematically for cases in which lower courts disagreed about a legal issue, a situation more likely to draw the Supreme Court’s attention.

Goldstein avidly pursued clients in these cases, regardless of their ability to pay. Goldstein said he was paid only a few thousand dollars for the first eight cases he argued at the Supreme Court in a three-year period. “It was the only way to get from there to here,” he said.

The method now is considered routine, but when he first started doing it, other Supreme Court lawyers looked askance. Chief Justice John Roberts, in private practice at the time, was one of them. He compared what Goldstein did to a heart surgeon cold-calling prospective patients.

In October 2002, the other thing Goldstein surmised might help the law firm he and Howe were running from their house was a blog. “Turns out it was a really stupid idea,” Goldstein said in a C-SPAN interview. “People don’t say, ‘Get me the guy with the website.'”

His fortunes have changed since then. Now with 30 arguments under his belt, he is among only a few lawyers in private practice who have argued multiple cases at the court in recent years.

The blog got a huge boost in credibility when it hired veteran reporter Lyle Denniston, who began covering the Supreme Court during the Eisenhower administration. He wants a formal press credential for Denniston, whose pass is courtesy of a Boston public radio station for which he works only rarely, and maybe even Howe.

The court has remained noncommittal about how to treat SCOTUSblog. Court spokeswoman Kathy Arberg said she is reviewing the credentialing process for the first time in nearly 40 years. “We won’t act on any pending requests until we have completed that process,” Arberg said.