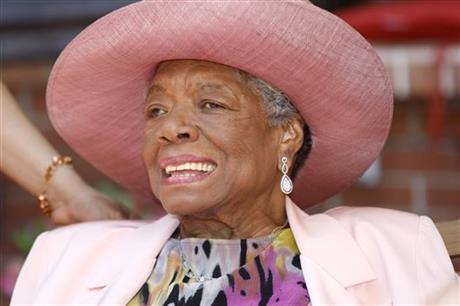 By HILLEL ITALIE
FILE – In this May 20, 2010, file photo, author Maya Angelou socializes during a garden party at her home in Winston-Salem, N.C. The National Book Foundation announced Thursday, Sept. 5, 2013, that Angelou, author of “I Know Why the Caged Bird Sings,” will be this year’s recipient of the Literarian Award, an honorary National Book Award for contributions to the literary community. (AP Photo/Nell Redmond, File)
NEW YORK (AP) — The book world is finally honoring Maya Angelou.

The poet and author of “I Know Why the Caged Bird Sings” will be this year’s recipient of the Literarian Award, an honorary National Book Award for contributions to the literary community, the National Book Foundation announced Thursday. It is the first major literary prize for the 85-year-old Angelou, who has been celebrated everywhere from the Grammy Awards to the White House. She has received three Grammys for best spoken word album, a National Medal of Arts and the Presidential Medal of Freedom, the country’s highest civilian honor.

“Dr. Angelou’s body of work transcends the words on the page,” the book foundation’s executive director, Harold Augenbraum, said in a statement. “She has been on the front lines of history and the fight for social justice and decade after decade remains a symbol of the redemptive power of literature in the contemporary world.”

E.L. Doctorow, a familiar name among prize judges, will receive an honorary medal for “contributions to American letters.” Doctorow, 82, won the National Book Award in 1986 for “World’s Fair” and was a finalist three other times. A native of New York City, he is best known for the million-selling historical novel “Ragtime,” which has been adapted into a feature film and a Broadway musical.

“Doctorow is a master of historical fiction who has brought the events of the past to people all over the world in an extraordinary fashion. It is also a special opportunity to give tribute to a native New Yorker in his hometown,” Augenbraum said.

“Any serious award such as this of the National Book Foundation has to be gratifying,” Doctorow wrote in an email to The Associated Press, adding that he believed literary awards did not only benefit the writers. “There is a communal value — they affirm the continuity of our literary culture.”

Previous winners of the National Book Award medal being given to Doctorow include Philip Roth, Arthur Miller and Elmore Leonard. Dave Eggers, Lawrence Ferlinghetti and NPR’s Terry Gross are among those who have received the Literarian Award.

Angelou, besides being a dancer, actress, filmmaker, singer and activist, has made historic contributions to reading and writing. “Caged Bird” is among the most widely read and widely taught memoirs of the past half-century, memorably documenting her rise from the rural, segregated South to international fame. Her poem “On the Pulse of the Morning,” which she recited in 1993 at President Bill Clinton’s first inaugural, quickly sold hundreds of thousands of copies.

But she has never won such top literary prizes as the Pulitzer or PEN/Faulkner and has never even been a nominee for a National Book Award, although she did serve with historians Robert Caro and Robert K. Massie as a judge in 1978 on the committee for best biography/autobiography. (The winner was W. Jackson Bate’s biography of the 18th-century English critic Samuel Johnson.)

A long list of nominees in the four competitive categories for the National Book Awards, which the Book Foundation presents, will be announced later this month. Angelou, whose primary residence is in North Carolina, has been in frail health and is expected to only make a brief appearance at the awards dinner and ceremony in November.