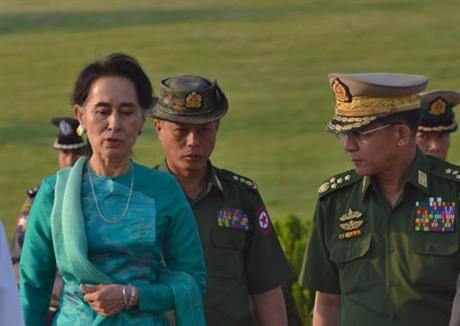 Myanmar and Laotian state media reported that Suu Kyi accompanied Myanmar President Htin Kyaw on the visit, which came at the invitation of the president of Laos, Bounnhang Vorachit.

Htin Kyaw was the first head of state to be hosted by Bounnhang, who officially assumed his post just three weeks ago.

The Laotian state news agency KPL said the purpose of the visit was to strengthen relations and cooperation between the countries.

Sponsored Links
8 Ways to Make Pinterest Work for Both B2C and B2B Marketing
Exact Target | Salesforce
11 Rules For Building Wealth After 50
The Motley Fool
It said both sides also exchanged points of view on regional and international issues of common interest, and discussed restarting direct flights between tourist and commercial destinations in both countries.

Suu Kyi, who took office on March 30, already held a meeting with a representative of Myanmar’s most important neighbor, when Chinese Foreign Minister Wang Yi visited the Myanmar capital Naypyitaw in early April.

Suu Kyi holds the post of state counsellor, which was specially created for her, and in that position is the country’s real leader. The military-imposed constitution barred her from becoming president, so as leader of her National League for Democracy party she arranged for her close associate Htin Kyaw to become president but defer to her as the decision-maker.

She seems likely to expand her power, as Htin Kyaw on Thursday proposed to Parliament that a Ministry for State Counsellor be created.

According to the state-controlled Global New Light of Myanmar newspaper, he explained that his proposal “is intended to speed up the government’s efforts at national reconciliation, internal peace, national development and the rule of law.”