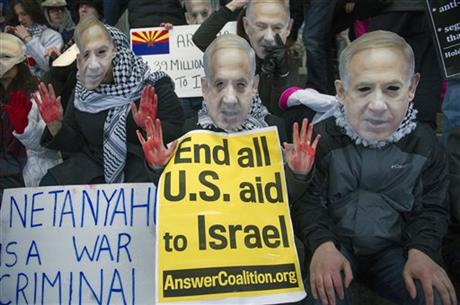 The backdrop for the rift between the longtime allies was the annual policy conference of the American Israel Public Affairs Committee, the largest pro-Israel lobby in the U.S. Netanyahu was to address the gathering Monday morning and his speech was to be bracketed by remarks from two senior U.S. officials: U.N. Ambassador Samantha Power and National Security Adviser Susan Rice.

Netanyahu’s visit to Washington has sparked criticism in both the U.S. and Israel. The centerpiece of his trip is an address to Congress Tuesday, which came at the invitation of congressional Republicans and was not coordinated with the White House.

Rice has been particularly sharp in her criticism of Netanyahu’s plans to address Congress, calling the move “destructive” to the fabric of the U.S.-Israel relationship.

The Israeli leader is deeply suspicious of Obama’s efforts to reach a nuclear agreement with Iran, fearing the U.S. and its negotiating partners are prepared to leave Tehran on the cusp of developing a nuclear weapon.

A Netanyahu adviser told reporters traveling with the prime minister to Washington Sunday that he was not coming to the U.S. capital to offend Obama.

“The prime minister is here to warn, in front of any stage possible, the dangers” of the agreement that may be taking shape, the adviser said, speaking anonymously under a policy that bars the official from speaking on the record.

The adviser said Israel was well aware of the details of the emerging nuclear deal and they included Western compromises that were dangerous for Israel. Still, he tried to lower tensions by saying that Israel “does not oppose every deal” and was merely doing its best to warn the U.S. of the risks entailed in the current one.

Secretary of State John Kerry, who is in Switzerland for another round of nuclear negotiations, warned Israel against releasing “selective details” of the negotiations.

“Doing so would make it more difficult to reach the goal that Israel and others say they share,” Kerry said.

The U.S. is seeking to secure a framework agreement to curtail Iran’s nuclear program in exchange for sanctions relief ahead of a late-March deadline. The U.S. is negotiating alongside Britain, France, Germany, Russia and China.