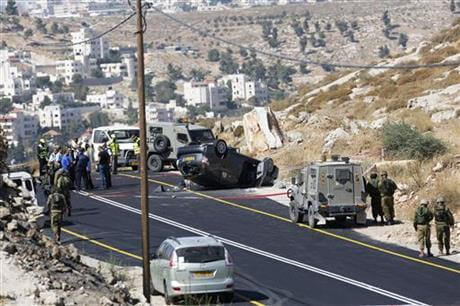 By MOHAMMED DARAGHMEH and IAN DEITCH
A Palestinian gunman ambushed a family traveling in a car in the West Bank on Friday, killing an Israeli man and wounding his wife and two teenage children in an assault that prompted the military to send hundreds of troops to the area — the largest operation in the territory in two years.

The army also imposed a closure on the Hebron district, a flashpoint area where many of the recent attacks have stemmed from.

Additionally, Prime Minister Benjamin Netanyahu said Israel will reduce the amount of tax revenues it collects on behalf of the Palestinians each month, saying that some of the money was being given to families of attackers.

Sponsored Links
These Real Titanic Photos Will Leave You Speechless
BlitzLift
You’re In For A Big Surprise in 2016 If You Own A Home in Missouri
Comparisons.org Quotes
Lt. Col. Peter Lerner, an Israeli military spokesman, said the Hebron closure will limit movement except for humanitarian cases. Over 80 Palestinian attacks have originated or taken place in Hebron area since the current wave of violence erupted in September, he said. Hebron is the largest Palestinian city in the West Bank and home to about 170,000 Palestinians. About 850 Israeli settlers also live in heavily-guarded enclaves there.

Much of the animosity in the biblical city is over a holy site known to Jews as the Tomb of the Patriarchs and to Muslims as the Ibrahimi Mosque.

Lerner said an initial investigation shows the Palestinian car overtook the Israeli vehicle and opened fire before fleeing the scene. He said it was not immediately known how many gunmen carried out the attack. He said at least 20 shots were fired.

Hundreds of soldiers deployed will act as “a physical barrier on the ground,” Lerner said, describing it as the military’s “most substantial” steps taken in the West Bank since 2014, when thousands of troops entered the West Bank to find three Israeli teenagers who were abducted and killed by Palestinian gunmen.

Lerner did not elaborate on how long the closure would be in place.

Hebron Mayor Dawod Zatari said the Israeli troops closed the southern entrance to the city, which connects it to other cities and villages.

“This measure is meant to collectively punish our people,” he said.

In Friday’s shooting, an Israeli man was killed and his wife and two teenage children were wounded, Israel’s ambulance service said.

The man was identified in Israeli media as Miki Mark, 48, the head of a Jewish seminary in the settlement of Otniel. Reports said he was a father of 10 and a cousin of Yossi Cohen, the head of Israel’s spy agency, Mossad.

In another attack Friday, Israeli police said a Palestinian woman, later identified by Palestinian officials as 27-year-old Sarah Tarayreh, had attempted to stab an officer during a security check outside the Hebron shrine.

She aroused suspicion at the checkpoint and was asked to go into a room to undergo a further security check by a female police officer, said Israeli police spokeswoman Luba Samri. At that point, the woman pulled out a knife and tried to stab a female officer before she was shot and killed, Samri said.

Tarayreh was from the same town and the same clan as the Palestinian who stabbed a 13-year-old Israeli-American girl to death as she slept in her bedroom on Thursday, but was not a close relative, said the mayor of Bani Naim, Mahmoud Manasrah. Palestinian clans in the West Bank can have thousands of members.

The killing of the 13 year-old-girl, carried out by a 17-year-old Palestinian high school dropout, was among the most brazen attacks so far in a nine-month wave of assaults, and it drew angry accusations and calls from Israeli leaders for the world to condemn the incident. On Thursday evening, a Palestinian stabbed and wounded a man and a woman in the Israeli city of Netanya.

Over the past nine months, Palestinians have carried out dozens of stabbings, shootings and attacks using cars against civilians and security forces that killed 34 Israelis and two American tourists. Israeli troops as well as some armed civilians have killed about 200 Palestinians during this period, most said by Israeli to be attackers.

The Palestinians and Israeli rights groups have accused Israel of using excessive force at times by killing assailants who they say could have been subdued. In some cases, Palestinians were killed as they tried to flee the scene, or after they had already been stopped or wounded after carrying out an attack.

Israel says the violence is fueled by a Palestinian campaign of lies and incitement, compounded on social media sites that glorify and encourage attacks. Palestinians say it stems from frustration at nearly five decades of Israeli rule in territory they claim for a state.

Netanyahu on Friday visited the family of Hallel Yaffa Ariel, the girl stabbed to death Thursday.

“To see Hallel’s room, to see the blood stains next to her bed and the books and clothes of a small child, this is shocking,” he said.

In announcing the tax money withholdings, Netanyahu accused the Palestinian Authority, which runs the West Bank, of transferring funds to attackers by various laundering methods.

“The more severe the acts of terrorism, the greater the amount of funds,” he said, adding that payment “to terrorists and their families constitutes incentive for murder.”

The Palestinian ministry of prisoner affairs said the salaries are paid to every Palestinian prisoner and freed prisoners who spent more than five years in Israeli jails.

“The money goes to the families as social welfare, we cannot leave any family without help,” said Issa Qaraqe, the minister for prisoner affairs.

Also Friday, a report by, the Quartet of Mideast negotiators — the U.N., U.S., European Union and Russia — said Israel’s settlement expansion is eroding the viability of a Palestinian state and raises “legitimate questions” about its commitment to a two-state solution.

The report criticizes the glorification of Palestinians who commit “terrorist attacks” and calls on the Palestinians to “act decisively” to stop incitement to violence and to clearly condemn “all acts of terrorism.”