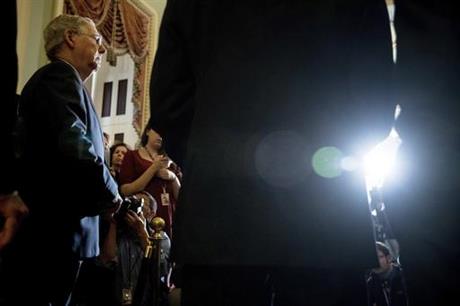 By ERICA WERNER
For Republicans, there will be no one left to blame.

As they prepare to take control of the White House and both chambers of Congress next year, Republicans are celebrating the opportunity to enact a new agenda for the country, including lowering taxes, securing the border and repealing President Barack Obama’s health care law.

But with that opportunity comes massive political risk: If President-elect Donald Trump and congressional Republicans don’t deliver, they will face a serious reckoning with voters. That could begin with the 2018 midterm elections, when every House member and one-third of the Senate will be up for re-election.

Said Sen. Ted Cruz of Texas, speaking Friday at the Federalist Society: “It’s time to put up or shut up. There are no excuses.”

That sobering reality has been sinking in for GOP members of the House and Senate as they begin the early stages of planning an agenda for next year.

Republicans point out that although they will control a majority in the Senate with 52 votes, that’s well short of the 60-vote supermajority needed to advance most major initiatives, including Supreme Court nominees. So although Republicans would be able to use a legislative maneuver to send a health care repeal to Trump’s desk with just a simple majority, other major objectives, including immigration and border enforcement, would require some degree of cooperation from minority Democrats.

That could give Senate Democrats’ new leader, Chuck Schumer of New York, veto power over major chunks of Trump’s agenda. And it’s led to a call from some House Republicans for their Senate colleagues to try to push through a rules change to eliminate the 60-vote filibuster barrier.

Senate Majority Leader Mitch McConnell, R-Ky., is an institutionalist who has shown no enthusiasm for such a move. But Republicans fret that a shortage of votes in the Senate is not likely to be a winning political excuse to most voters who picked an outsider in Trump to bring wholesale change to Washington, and now want to see that happen.

“We can talk about not having 60 in the Senate, but I think that our time to show that we can govern is now,” said GOP Rep. Tom Rooney of Florida.

The Republican role on health care seems particularly risky to some in the party. Democrats have born severe political consequences for pushing through the Affordable Care Act in 2010. They lost control of the House in that year’s midterm elections, and Republicans have used the health care issue ever since to rally their base and attack Democrats.

But if Republicans repeal it, as they are determined to do, they will be the ones responsible for whatever comes next. And given the enormous complexity of the U.S. health care system, which accounts for fully one-sixth of the U.S. economy, the potential for complications looks immense. Even after six years, Republicans have failed to unite around a single alternative to Obamacare, or a solution to ensure that the 20 million Americans who gained health coverage under the law don’t suddenly lose it.

Schumer warned in an interview Friday that repealing the health care law would turn into “a political nightmare” for Republicans.

And even while cheering the opportunity to undo the health law, House Speaker Paul Ryan acknowledged in a news conference this past week that, “It’s too early to know the answer to, ‘How fast can Obamacare relief occur?'”

Many Republicans believe Democrats overreached in the early years of the Obama administration, when they controlled the White House and both chambers of Congress. Voters took Democrats’ majorities away, and now Republicans are mindful of making the same mistake themselves.

Rather than a rightward lurch, “It’s paramount right now in American politics to build a plurality coalition, because we are still a country of great diversity,” argued Paul Schumaker, who was North Carolina GOP Sen. Richard Burr’s chief re-election consultant this year.

And even as Republicans prepare to enact a governing agenda, it’s unclear in some cases what that agenda will be, because some of Trump’s promises clash with goals set out over the years by Ryan and other congressional Republicans. For example, Trump has promised to protect Medicare; Ryan has proposed turning it into a voucher-like program for future retirees. Trump is proposing a $1 trillion infrastructure bill; most conservatives balk at major new government spending.

As for Democrats, even from their defensive crouch they’re eyeing the political upside that could result from full Republican control of the nation’s capital.

House Minority Leader Nancy Pelosi, who is facing a rare leadership challenge from Democratic colleagues distraught about the election results, tried to reassure her caucus this past week that midterm elections in an opposition president’s first term offer a singular chance for political gain.

“Trump is president, we have a bigger opportunity to take the Congress, just following history, in our generation of being involved in politics,” said the California Democrat.