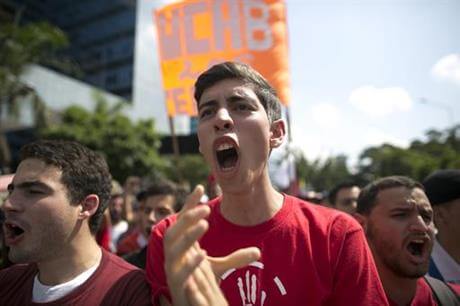 By JOSHUA GOODMAN and HANNAH DREIER
Masses of protesters jammed the streets of Venezuela’s capital on Wednesday on the heels of a move by congress to open a political trial against President Nicolas Maduro, whose allies have blocked moves for a recall election.

Some schools and shops were shut as demonstrators marched toward key points around Caracas to demand Maduro’s ouster.

Electoral authorities blocked a recall campaign against the deeply unpopular president last week, and the faceoff escalated on Tuesday when the opposition-led legislature voted to put Maduro on trial, accusing him of effectively staging a coup.

That trial would have little legal effect since the constitution does not give congress power to oust the president and Maduro still controls other branches of government, including the military and Supreme Court, which has already declared the National Assembly illegitimate.

by TaboolaMore from AP
The Latest: Trump says ‘it would be very easy to apologize’
Witness: Officers in polygamous towns try to stop evictions
Artist Freddy Salazar was among the tens of thousands of protesters who filled major thoroughfares and plazas.

“We have taken to the streets so that the whole world can see that we don’t support this corrupt regime,” he said. “We are here to defend our country and our quality of life.”

Government supporters staged a much small protest in the heart of the city. Anti-government demonstrators have attempted to march to downtown a dozen times this year, but have been turned back by state security forces.

Protesters also rallied in other major Venezuelan cities to demand Maduro’s resignation in a nationwide show of support for the opposition leaders were calling “the takeover of Venezuela.”

Local news media reported clashes with police and tear gassing in provincial capitals. Some protesters said they had been unable to get to Caracas Wednesday as the government shut down roads and metro stations.

Opposition legislators argued that Venezuela’s leader has effectively abandoned the presidency by neglecting his job. Several also questioned whether he was a dual Colombian national and therefore ineligible to hold Venezuela’s highest office — an old, unproven claim.

Unlike other countries in Latin America such as Brazil, where Dilma Rousseff was removed from the presidency in August, Venezuela’s National Assembly can’t impeach the president. That decision lies squarely with the Supreme Court, which has never voted against Maduro.

Even as tempers flare, the government and opposition have agreed to embark on an attempt at dialogue to defuse the crisis.

The talks, being sponsored by the Vatican and other South American governments, are set to begin Oct. 30 in the Caribbean island of Margarita. Maduro, who met with Pope Francis privately at the Vatican on Monday, said he will travel to Margarita to personally launch the talks.

But the two sides have gone down this road before during previous crises, and the opposition has scant hope for a breakthrough. Although Venezuelans overwhelmingly blame Maduro for food lines and triple-digit inflation the ruling party is in firm control of institutions like the military and has shown no interest in yielding to the opposition.

Defense Minister Gen. Vladimir Padrino, who many had been looking to as a potential brake on Maduro, spoke to the nation Tuesday dressed in camouflaged fatigues and surrounded by the top military command urging dialogue but calling on the opposition to respect the constitution.

That prompted an angry rebuke from National Assembly President Henry Ramos, who during the special session accused the military man of abandoning his constitutional duty to uphold Venezuela’s democracy.

“How can he talk of respecting the constitution if he has become the foremost pimp of this regime’s violation of the constitution,” Ramos said, challenging security forces to arrest him when he attempts next week to travel to Washington to denounce Maduro’s latest power grab.

On Wednesday, Maduro convened a meeting of the heads of all the country’s major institutions and said he lamented that Ramos had decided not to attend. State-run television lingered on the empty chair that had been reserved for the head of Congress. Maduro went on to call for national unity.

“I’m very sorry that the Congress president continues to show contempt for the constitution, and doesn’t want to enter into dialogue,” he said. “I want everyone to behave reasonably and know that we are all Venezuelans.”