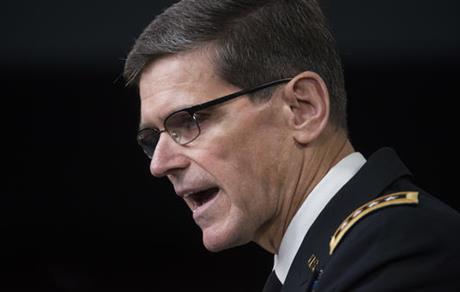 A U.S. aerial gunship attack on a hospital in Afghanistan that killed 42 people occurred because of human errors, process mistakes and equipment failures, and none of the aircrew or U.S. ground troops knew the target was a hospital, a top U.S. general said Friday.
By ROBERT BURNS
“This was an extreme situation” complicated by combat fatigue among U.S. special operations forces, Gen. Joseph Votel told a Pentagon news conference. Votel headed U.S. Special Operations Command at the time of the tragic attack last fall. In March he took over U.S. Central Command, which oversees military operations in Afghanistan.

Sixteen military members have been disciplined for their roles in the tragedy, Votel said. None face criminal charges.

Votel said investigators concluded that certain personnel failed to comply with the rules of engagement and the law of armed conflict. However, they also determined that these failures did not amount to a war crime, he said.

Sponsored Links
23 Touching Photos That Will Bring You To Tears
LifeDaily.com
How Biologics Can Help Your Ulcerative Colitis Over Time
HealthCentral.com
“The label ‘war crimes’ is typically reserved for intentional acts — intentional targeting (of) civilians or intentionally targeting protected objects or locations,” Votel said. “Again, the investigation found that the incident resulted from a combination of unintentional human errors, process errors and equipment failures, and that none of the personnel knew they were striking a hospital.”

Votel expressed “deepest condolences” to those injured and to the families of those killed. He said the intended target of the U.S. attack was a compound about a quarter-mile away from the hospital.

No criminal charges have been leveled against U.S. military personnel for mistakes that resulted in the Oct. 3, 2015, attack on the civilian hospital in Kunduz, Afghanistan, operated by the medical charity Doctors Without Borders. The group has called the attack a war crime and demanded an independent investigation.

Votel said that the trauma center was on a U.S. military no-strike list but that the gunship crew didn’t have access to the list because it launched its mission on short notice and as a result did not have the data loaded into its onboard systems. He said the military has sought to avoid similar mistakes in the future by requiring that such data be pre-loaded into aircraft.

The Pentagon on Friday released a memorandum from Defense Secretary Ash Carter ordering military commanders to take a series of steps over the next four months to “mitigate the potential for similar incidents in the future.” Among other things, Carter ordered that the Kunduz scenario be incorporated into pre-deployment training as an example of the kind of complicated situations that troops may face in Afghanistan or other war zones.

Central Command released a redacted version of the full investigation report on Friday, including details about what exactly led a U.S. AC-130 gunship to bomb the hospital and how those mistakes were made.

“The investigation determined that all members of both the ground force and the AC-130 air crew were unaware that the aircraft was firing on a medical facility throughout the engagement,” Votel said. “The investigation ultimately concluded that this tragic incident was caused by a combination of human errors, compounded by process and equipment failures.”

Votel said 16 military members, including officers as well as enlisted, have been disciplined. He said none of their names will be released to protect the privacy of the individuals and in some cases because they are still assigned to sensitive or overseas positions.

According to one senior U.S. official, a two-star general was among about 16 disciplined.

A number of those punished are U.S. special operations forces. Among the 16, some were given letters of reprimand and admonishment; one officer was removed from command; some were suspended from their duties and some were given extensive retraining. No one was sent to court-martial.

“It is important to point out that these adverse administrative actions can carry severe repercussions on the careers and professional qualification of these individuals,” Votel said, to include possible denial of promotion or advancement and possible removal from the service.

The crew of the AC-130, which is armed with side-firing cannons and guns, had been dispatched to hit a Taliban command center in a building 450 yards from the hospital, the U.S. military said in November. Hampered by problems with their targeting sensors, the crew relied on a physical description that led them to begin firing at the hospital even though they saw no hostile activity there. Votel on Friday confirmed that no hostile firing was seen there.

A separate U.S. report on the incident, obtained last fall by the AP, said the AC-130 aircraft fired 211 shells at the hospital compound over 29 minutes before commanders realized the mistake and ordered a halt. Doctors Without Borders officials contacted coalition military personnel during the attack to say the hospital was being ‘bombed’ from the air,” and the word finally was relayed to the AC-130 crew, that report said.

The attack came as U.S. military advisers were helping Afghan forces retake Kunduz, which had fallen to the Taliban on Sept. 28. It was the first major city to fall since the Taliban were expelled from Kabul in 2001.

Afghan officials claimed the hospital had been overrun by the Taliban, but no evidence of that has surfaced. The hospital was destroyed and Doctors Without Borders, also known by its French acronym, MSF, ceased operations in Kunduz.