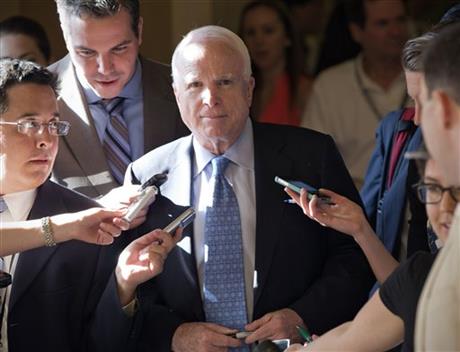 FILE – In this July 15, 2013, file photo Sen. John McCain, R-Ariz., is surrounded by reporters as he heads to the Old Senate Chamber for a closed-door meeting on Capitol Hill in Washington. About two months ago McCain likened fellow Republican Sens. Ted Cruz of Texas and Rand Paul of Kentucky, and others to “wacko birds” for their style of confrontational politics. Paul responded a short while later to McCain, the party’s 2008 presidential candidate and a 5th term senator. “The GOP of old has grown stale and moss-covered. I don’t think we need to name any names, do we?” Paul said. (AP Photo/J. Scott Applewhite, File)
Rand Paul, Ted Cruz

FILE – In this July 16, 2013 file photo Republican Sens. Rand Paul of Kentucky, and Ted Cruz of Texas take part in a news conference on Capitol Hill in Washington. About two months ago Republican Sen. John McCain of Arizona likened Cruz and Paul, and others to “wacko birds” for their style of confrontational politics. Paul responded to the party’s 2008 presidential candidate and 5th term senator by saying, “The GOP of old has grown stale and moss-covered. I don’t think we need to name any names, do we?” (AP Photo/Charles Dharapak, File)

WASHINGTON (AP) — The barbs are personal, the differences are multiplying among Republicans, a party divided over spending, foreign policy, a willingness to risk a government shutdown in order to defund the health care law and more.

“I didn’t start this one and I don’t plan on starting things by criticizing other Republicans,” Sen. Rand Paul of Kentucky said recently as he and New Jersey Gov. Chris Christie likened one another to various cuts of a butchered pig.

“But if they want to make me the target, they will get it back in spades.”

No matter who started it, in the past few months, one Republican called others “wacko birds,” another said some of the party’s lawmakers were “stale and moss-covered” and a third suggested one member of the GOP was a tool of the White House.

A recent flare-up over defunding the health law prompted Texas Sen. Ted Cruz of Texas to question the political manhood of fellow Republicans unwilling to risk closing down the government over the future of “Obamacare,” as GOP critics call the law they want to repeal. “They’re scared of being beaten up politically,” he said.

Not all the disagreements are dipped in acrimony. Some are re-emerging after the party papered over its differences in an unsuccessful campaign to defeat President Barack Obama last year. This spring, 14 Senate Republicans supported legislation that included a chance at citizenship for millions living in the country illegally. The other 32 opposed it, including the entire top leadership.

In some cases, though, policy or strategic differences are overshadowed as Republicans simply call one another names, a type of clash that frequently pits newer, tea party-backed lawmakers against more experienced conservatives.

Two months ago, Sen. John McCain of Arizona likened Cruz, Paul and others to “wacko birds” for their style of confrontational politics.

Republican Rep. Justin Amash of Michigan responded from across the Capitol. “Bravo, senator. You got us. Did you come up with that at #DinnerWithBarack?” he tweeted, a none-too-subtle suggestion that McCain was parroting a line he had heard at the White House.

Paul responded a short while later to McCain, the party’s 2008 presidential candidate and a fifth-term senator. “The GOP of old has grown stale and moss-covered. I don’t think we need to name any names, do we?” he told an audience of conservatives.

Cruz, along with Sens. Mike Lee of Utah and Marco Rubio of Florida, recently urged Republicans to swear off voting for any year-end spending bill that includes money for the health law.

Others countered that the result could be a partial shutdown of the government and a political windfall for Democrats.

“I think it’s the dumbest idea I’ve ever heard,” said Sen. Richard Burr, R-N.C. “Some of these guys need to understand that if you shut down the federal government, you better have a specific reason to do it that’s achievable.”

Burr was in the House nearly two decades ago when Republicans threatened they would shut down the government in hopes of winning spending concessions from President Bill Clinton. They followed through, but were eventually forced into a retreat as the White House held firm and public opinion turned against them.

All Republicans say they want to repeal the health law. But the tea party-backed campaign has thrust some lawmakers into difficult positions as they juggle competing political imperatives.

Senate Republican leader Mitch McConnell has refrained from signing the letter circulated by Lee, Cruz and others, even though he faces a primary challenge from the right in his re-election campaign in Kentucky.

The second-ranking GOP leader, Sen. John Cornyn of Texas, signed the letter, then removed his name. A spokeswoman, Megan Mitchell, said that after the senator reviewed the document, which he already signed, he “felt the best approach” was legislation advanced by Cruz to “actually defund Obamacare.”

Differences among rank-and-file lawmakers make for bipartisan agreements, as on the immigration bill, but they also can make it hard for party leaders to negotiate effectively with the White House and Democrats.

Ironically, the consequences of a lack of party unity were clearly on display recently when Republicans were able to exploit a split between Obama and Senate Democrats over student loan legislation.

Among Republicans, disagreements over foreign policy and national security are “normal, kind of an ideological contest that’s been with the party in the 20th century and will be in the 21st,” said McCain, referring to an isolationist strain within the GOP that last flourished decades ago.

In the case of government surveillance, Republicans who might have swallowed their misgivings when President George W. Bush was in the White House are freer to express them.

Elected in 2010, Paul has been sharply critical of widespread National Security Agency surveillance in the wake of recent disclosures. But so, too, has Rep. James Sensenbrenner of Wisconsin, a 35-year veteran of Congress.

He sided with Amash and others in both parties recently in voting to restrict the NSA’s activities. Sensenbrenner noted that he was the principal author of the anti-terrorism Patriot Act, first passed in 2001 after the Sept. 11 attacks, and worked to reapprove the measure five years later.

Now, he said, the NSA is conducting surveillance far beyond what was envisioned, and “the time has come to stop it.”

Once again, one Republican pleaded with others to think back only a few years. “Have 12 years gone by and our memories faded so badly that we’ve forgotten what happened on Sept. 11,” asked Rep. Mike Rogers, chairman of the House Intelligence Committee.

The disagreements extend beyond the Beltway.

Paul and Christie recently engaged in a running battle that befits a pair of rivals for the presidential nomination — which they may someday be.

They warmed up with a spat over national security, then moved on to spending.

Paul referred to the costs of repairing damage caused by Superstorm Sandy last fall, and said Christie and GOP Rep. Peter King of New York “are the people who are bankrupting the government and not letting enough money be left over for national defense.”

Two days later, Christie said he had “nothing personal” against Paul, then unloaded.

The following day, he called Christie the “king of bacon.”