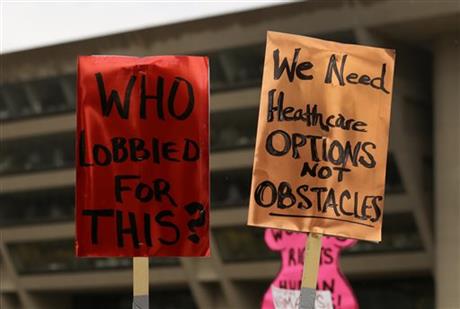 FILE – In this July 15, 2013 file photo, two signs that read “Who Lobbied For This?” and “We Need Healthcare Options, Not Obstacles” are held by attendees of a rally in front of Dallas city hall where a group of nearly 200 gathered to protest the approval of sweeping new restrictions on abortion in Texas. A U.S. appeals court on Thursday, Oct. 31, 2013, issued a ruling reinstating most of Texas’ tough new abortion restrictions, which means as many as 12 clinics will not be able to perform the procedure starting as soon as Friday. (AP Photo/Tony Gutierrez, File)
Dottie Knodell, Tom Knodell

File – In this Oct. 29, 2013 file photo, Dottie and Tom Knodell, opponents of abortion, hold signs outside a Planned Parenthood Clinic, in San Antonio. A U.S. appeals court on Thursday, Oct. 31, 2013, issued a ruling reinstating most of Texas’ tough new abortion restrictions, which means as many as 12 clinics will not be able to perform the procedure starting as soon as Friday. (AP Photo/Eric Gay, File)

AUSTIN, Texas (AP) — A third of the abortion clinics in Texas can no longer perform the procedure starting Friday after a federal appeals court allowed most of the state’s new abortion restrictions to take effect.

A panel of judges at the 5th Circuit Court of Appeals in New Orleans ruled Thursday evening that Texas can enforce its law requiring doctors to have admitting privileges at a nearby hospital while a lawsuit challenging the restrictions moves forward. The panel issued the ruling three days after District Judge Lee Yeakel determined that the provision violated the U.S. Constitution and said it serves no medical purpose.

The panel’s ruling is not final, and a different panel of judges will likely hear the case in January. But in the meantime, Texas clinics will have to follow the order. Twelve of the 32 clinics in Texas that perform abortions don’t have doctors who have admitting privileges at nearby hospitals, meaning they won’t be able to perform the procedure, though they can provide other services.

In its 20-page ruling, the appeals court panel acknowledged that the new provision “may increase the cost of accessing an abortion provider and decrease the number of physicians available to perform abortions.” However, the panel said that the U.S. Supreme Court has held that having “the incidental effect of making it more difficult or more expensive to procure an abortion cannot be enough to invalidate” a law that serves a valid purpose, “one not designed to strike at the right itself.”

Although several conservative states in recent months have approved broad abortion limits, the Texas ones were particularly divisive because of the number of clinics affected and the distance some women would have to travel to get an abortion.

After Yeakel ruled Monday, Texas Attorney General Greg Abbott had made an emergency appeal to the 5th Circuit, arguing that the requirement that doctors have admitting privileges is a constitutional use of the Legislature’s authority.

“This unanimous decision is a vindication of the careful deliberation by the Texas Legislature to craft a law to protect the health and safety of Texas women,” Abbott, a Republican who is running for governor, said in a written statement after Thursday’s decision.

Planned Parenthood said the ruling means “abortion will no longer be available in vast stretches of Texas.” Lawyers for Planned Parenthood and other abortion providers had argued that the regulations do not protect women.

“This fight is far from over,” Planned Parenthood President Cecile Richards said in a statement. “This restriction clearly violates Texas women’s constitutional rights by drastically reducing access to safe and legal abortion statewide.”

The appeals court left in place a portion of Yeakel’s order that prevents the state from enforcing the 18-year-old U.S. Food and Drug Administration protocol for abortion-inducing drugs in cases where the woman is between 50 and 63 days into her pregnancy. Doctors testifying before the court had said such women would be harmed if the protocol were enforced.

The law that the Legislature passed this summer also bans abortions at 20 weeks of pregnancy and beginning in October 2014 requires doctors to perform all abortions in surgical facilities.

The restrictions are among the toughest in the nation and gained notoriety when Democratic state Sen. Wendy Davis launched a nearly 13-hour filibuster against them in June. Davis has since launched her own gubernatorial campaign and could face Abbott in the November 2014 election.

Officials for one chain of abortion clinics testified during the trial that Yeakel oversaw that they’ve tried to obtain admitting privileges for their doctors at 32 hospitals, but so far only 15 accepted applications and none have announced a decision. Many hospitals with religious affiliations will not allow abortion doctors to work there, while others fear protests if they provide privileges. Many have requirements that doctors live within a certain radius of the facility, or perform a minimum number of surgeries a year that must be done in a hospital.

Federal judges in Wisconsin, Kansas, Mississippi and Alabama all have found problems with state laws prohibiting doctors from conducting abortions if they don’t have hospital admitting privileges.

Mississippi is also in the 5th Circuit, and the appeals court in that case had left in place a temporary injunction preventing the law from being enforced. But unlike in the Mississippi case, Yeakel’s order was a final decision, setting the groundwork for the 5th Circuit to review the merits of the law.