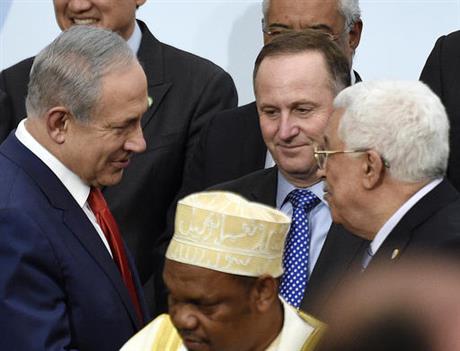 By NATALIYA VASILYEVA
Russia’s Foreign Ministry announced on Thursday that the Israeli and the Palestinian leaders have agreed “in principle” to meet in Moscow for talks in what the Russians hope will relaunch the Mideast peace process after more than a two-year break.

The comments indicate that Russia is pushing forward with its attempt to become a peace broker after a setback earlier in the week. On Tuesday, the Palestinian president, Mahmoud Abbas, said a meeting scheduled in Moscow this week had been delayed at Israel’s request.

While bringing the men together would represent an accomplishment for Moscow, a diplomatic breakthrough seems unlikely.

by TaboolaMore from AP
Russia, Saudi Arabia pledge to stabilize oil output
NATO: Russia increasingly staging snap military drills
The last round of peace talks broke down two and a half years ago, with no progress reported during months of negotiations brokered by the United States. The Palestinian leader has demanded that Israel halt settlement construction on occupied lands claimed by the Palestinians and carry out a prisoner release that was promised during the last round of talks.

Netanyahu has rejected the terms and said the meeting should take place without conditions.

In Moscow, Russian Foreign Ministry spokeswoman Maria Zakharova said on Thursday that Abbas and Netanyahu had accepted an invitation to meet in the Russian capital, but a date has not been set yet. There also was no word on whether the two had settled on an agenda for the meeting — the key stumbling block in preparations.

“The most important thing is to pick the right timing,” Zakharova told reporters. “Intensive contacts on this are ongoing.”

During a visit to Poland on Tuesday, Abbas said a meeting in Moscow had been scheduled this week, but that Israel had delayed it at the last minute. Abbas and Netanyahu exchanged a brief handshake last year at a global climate change conference in Paris but have not held a public working meeting since 2010.

“If the Palestinian Authority can say with one voice that they are willing to meet without preconditions, then Prime Minister Netanyahu will meet President Abbas,” said the Israeli leader’s spokesman, David Keyes.

If a meeting takes place, the chances for substantial progress would seem slim.

The Palestinians seek to establish an independent state in the West Bank, Gaza Strip and east Jerusalem — territories captured by Israel in the 1967 Mideast war. While the Palestinian claims have wide international backing, Netanyahu has refused to use Israel’s pre-1967 lines as a basis for border talks, retreating from positions adopted by his predecessors.

The Palestinians have accused Israel’s hard-line government of seeking a “peace process” as a diplomatic shield against international criticism. The Netanyahu government has tried to discredit Abbas, accusing him of anti-Israel incitement and alleging he is not a partner for a peace deal.

If a meeting were to take place, it would reflect the growing Russian influence in the Middle East. The Russian military has sent fighter jets to Syria to back Syrian President Bashar Assad in his battle against various rebel groups. Israel, while largely staying out of the war, maintains close contact with the Russians to avoid any clashes between the two countries’ air forces along the border with Syria.

Russia’s offer in recent weeks to host the Israeli and Palestinian leaders is one of several international initiatives, including a French plan to hold an international peace conference and Egyptian offers to bring the sides together as well.