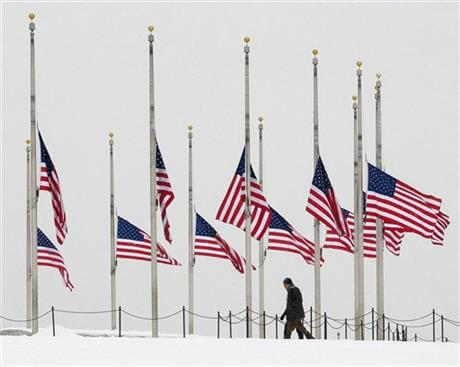 Vulnerable GOP incumbents in Pennsylvania, Wisconsin, New Hampshire and Ohio — all states that Obama won twice — echoed McConnell’s contention that the winner of the presidency in November’s election should choose the next jurist. Democrats counter that Obama is president until Jan. 20, 2017, and has every constitutional right to nominate Scalia’s replacement.

Obama has said he will fulfill his constitutional duty and nominate a replacement in due time. His Democratic allies made it clear that denying the president that right would be an unprecedented step and argued it would enshrine the GOP as “the most nakedly partisan, obstructionist and irresponsible majority in history.”

“By ignoring its constitutional mandate, the Senate would sabotage the highest court in the United States and aim a procedural missile at the foundation of our system of checks and balances,” Senate Minority Leader Harry Reid, D-Nev., said in a scathing op-ed in Tuesday’s Washington Post.

Sponsored Links
DevOps: Turning a Security Concern into a Security Asset
Perforce
25 Never before Seen Photos From History. #14 is Unbelievable
Find My Pap
The No. 3 Democrat in the Senate, Chuck Schumer of New York, said Tuesday that he expects Obama to select a consensus candidate who could get bipartisan support.

Following McConnell’s lead, Republican Sens. Rob Portman of Ohio, Ron Johnson of Wisconsin and New Hampshire’s Kelly Ayotte said the American people should have a say on who should make the lifetime appointment to the court, especially since it will decide the tilt of the court for generations.

Sen. Ted Cruz, the Texan who has practiced before the high court and is seeking the Republican presidential nomination, has vowed to filibuster any nominee. Republican Sen. Pat Toomey of Pennsylvania said Obama has the authority to nominate, “but let’s be clear — his nominee will be rejected by the Senate.”

Senate Republicans have the numbers in this consequential “advice and consent” fight.

Republicans outnumber Democrats 11-9 on the Judiciary Committee, which would hold confirmation hearings and vote on whether to send the nominee to the full Senate. The GOP holds the majority, 54-46, and Democrats face an almost insurmountable task in trying to get 14 Republicans to join them in breaking a certain filibuster.

Beyond math is the political calculus. Control of the Senate is at stake this election and Democrats looking to unseat Portman and Toomey — along with Ayotte and Johnson — have seized on their call to wait until next year.

In a fundraising appeal, Ohio Democrat Ted Strickland said Portman “has a clear choice to make: He can look out for his party and D.C. special interests by holding back President Obama’s nominee, or he can do his job for the people of Ohio.”

In New Hampshire, Democratic Gov. Maggie Hassan criticized Ayotte and argued that Obama’s constitutional right to nominate isn’t suspended in his last year in office. In Pennsylvania, three Democrats looking to take on Toomey railed against the partisanship over senatorial responsibility.

Democrats are counting on the pressure on Republican senators to force McConnell to allow a nominee to move forward, though the majority leader has shown no signs of relenting since his statement within hours of Scalia’s death on Saturday that the vacancy should not be filled until a new president is sworn in.

Various conservative groups which claimed victory when moderate Republican Speaker John Boehner of Ohio stepped down last year, and have questioned McConnell’s fealty, made it clear the GOP must stand firm.

“Senator McConnell is right: Under no circumstance should the Republican Senate majority confirm a Supreme Court nominee as Americans are in the midst of picking the next president,” said Michael Needham of Heritage Action. “Republican rhetoric condemning President Obama’s willful disregard for the rule of law will ring hollow if they do confirm a nominee.”

Republicans and Democrats have battled this year over Senate production — or lack of it — as possible action on trade and criminal justice reform look increasingly unlikely. Obama’s allies made clear that if a nominee is ignored or delayed, they will accuse the GOP majority of obstruction, and use that argument in their bid to win back the Senate.

“Senate Republicans continue to think that governing is as simple as being against President Obama at every turn,” said Sen. Dick Durbin of Illinois, the No. 2 Democrat in the Senate. “It’s not, and the American people deserve better leadership than they’re getting with this Congress.”