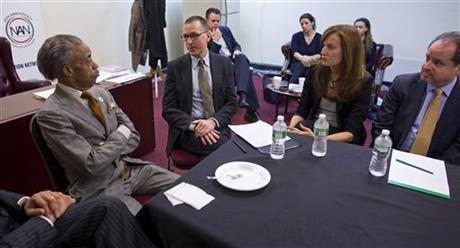 Two black customers accused Barneys of discrimination last week after they said they had lawfully purchased items but were detained by police on suspicion of credit card fraud.

“We had a very candid and open meeting today to begin a dialogue,” Sharpton said after the private meeting with Barneys CEO Mark Lee at Sharpton’s National Action Network office in Harlem.

Lee said Barneys’ own initial investigation showed no employees were at fault in the two incidents, but he said the retailer does not tolerate discrimination and wants “to be part of the solution” to racial profiling.

Macy’s flagship Manhattan store also has been hit with a claim from a black actor that he was stopped because of his race while shopping. Macy’s didn’t comment on the litigation but said in a statement it was investigating.

New York Attorney General Eric Schneiderman’s office sent letters to the executives at both Barneys New York and Macy’s East noting that racial discrimination in places of public accommodation including stores is prohibited under state and local civil rights law. The letters dated Monday asked executives at both stores to call the attorney general’s office to schedule meetings.

Speaking Tuesday in Buffalo, Schneiderman said, “We’re now demanding information from Barneys and Macy’s to assess their policies and their conduct in this regard.” He added, “Apparently there was some sort of policy in the stores and in some part of the NYPD to profile certain types of customers.”

Lee said Barneys would “cooperate fully” with the attorney general. Macy’s spokeswoman Elina Kazan said in a statement: “We have received the Attorney General’s letter and are fully cooperating with the request.”

One of the Barneys shoppers filed a discrimination lawsuit against Barneys, the city and its police department, while the other filed a complaint with the city’s police watchdog agency.

Lee deflected questions about whether he was suggesting that police acted on their own to detain the customers.

In a statement later, John McCarthy, the police department’s chief spokesman, said that officers acted on information they received from Barneys employees.

“In both instances, NYPD officers were conducting unrelated investigations and took action based on information brought to their attention by Barneys employees while in the security room,” McCarthy said.

The NYPD agrees with the attorney general that racial profiling is unacceptable, he said, “and that is why it is prohibited by department policy and also illegal in New York City.”

Lee also alluded to Barneys’ relationship with rap mogul Jay-Z, who has faced pressure to distance himself from the retailer since the profiling allegations surfaced.

“We deeply regret that these recent events have distracted from the great work of the Shawn Carter Foundation, and we offer our sincere apologies to Mr. Carter,” Lee said, using the entertainer’s real name.

An online petition and Twitter messages from fans have called on Jay-Z to bow out of his partnership with Barneys, which will have the store selling items by top designers, inspired by Jay-Z, with some of the proceeds going to his charity. Jay-Z said Saturday he was waiting to hear all the facts.