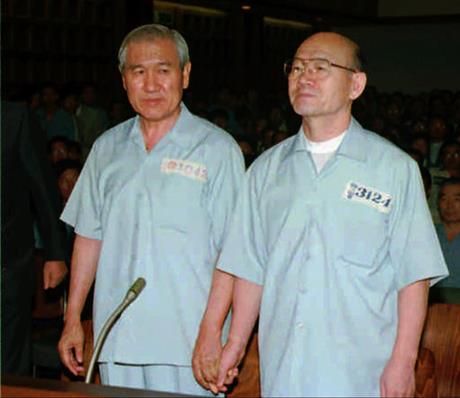 South Korea (AP) — If there’s one thing that South Korean presidents dread more than the looming threat of rival North Korea, it may be this: becoming an ex-president.

Nearly all former presidents, or their family members and key aides, have been embroiled in scandals at the close of their terms or after leaving office. There have been corruption allegations, coups — even a suicide and an assassination.

Now, South Korean prosecutors say they believe current President Park Geun-hye, facing historic levels of unpopularity as she approaches her last year in office, conspired in the criminal activities of a confidante who allegedly exploited her presidential ties to force businesses to donate money to two foundations she controlled.

Here’s a look at the troubles faced by South Korean presidents over the years:

Rhee staged vigorous campaigns to fight communism but later turned authoritarian and, critics say, resorted to corruption and nepotism to cling to power. He won his fourth presidential term in 1960 amid widespread allegations of vote-rigging. Nationwide student demonstrations forced him to flee to Hawaii, where he died in 1965.

A former Japanese colonial army lieutenant and primary school teacher, Maj. Gen. Park took power in a coup in 1961, which ended a brief period of civilian rule after Rhee resigned.

Park, the father of the current president, was credited with laying the foundation for South Korea’s economic growth. But his critics point out that he also arrested and tortured dissidents. He was assassinated by his spy chief during a drinking party in 1979.

Maj. Gen. Chun and his military cronies rolled tanks and troops into Seoul to seize power in a coup that ended the interim government of acting President Choi Kyu-hah.

Chun had himself elected president in a gymnasium filled with a pro-government electorate. In 1987, massive pro-democracy demonstrations forced him to accept a constitutional revision for direct presidential elections.

After his tenure ended, Chun spent two years in exile in a remote Buddhist temple as calls mounted to punish him for corruption and human rights abuses.

Roh, Chun’s army buddy and hand-picked successor, won the 1987 election, thanks largely to divided votes among opposition candidates. He presided over the 1988 Seoul Olympics.

In 1995, both Chun and Roh were arrested on charges of collecting hundreds of millions of dollars from businessmen while in office. They were also indicted on mutiny and treason charges stemming from Chun’s coup and a bloody 1980 crackdown that killed hundreds of pro-democracy protesters in the southern city of Gwangju.

Chun was sentenced to death and Roh to 22 1/2 years in jail. They were pardoned in December 1997.

His mismanagement of the economy, however, helped precipitate the 1997-1998 financial crisis that toppled some of the country’s debt-ridden conglomerates and forced the government to accept a $58 billion bailout from the International Monetary Fund.

He left office amid rock-bottom popularity with his son arrested and jailed for corruption.

Sentenced to death by a military tribunal under Chun, Kim rose to the presidency and held an unprecedented summit with North Korean leader Kim Jong Il in 2000; he was awarded the Nobel Peace Prize that year.

He left office tainted by corruption scandals involving aides and all three of his sons and dubious cash remittances to North Korea shortly before his historic inter-Korean summit.

Roh committed suicide in 2009, a year after leaving the presidential Blue House, amid allegations that his family members took $6 million in bribes from a businessman during his presidency.

Roh’s older brother was sentenced in 2009 to two and a half years in prison for influence-peddling during Roh’s presidency. He was later pardoned.

Roh was impeached in 2004 on allegations of incompetence and illegal electioneering. But the impeachment triggered a strong public backlash that helped his party win big in parliamentary elections. The Constitutional Court then ruled that his actions did not warrant removal from office.

Toward the end of his term, Lee, who campaigned on an anti-corruption platform, watched his only son and an elder brother come under fire for alleged irregularities in funding Lee’s retirement home.

Another brother was arrested on separate allegations of taking bribes from bankers and served a 14-month prison term.

This story has been corrected to show that a brother of ex-President Lee Myung-bak served a 14-month prison term, not 14-year.