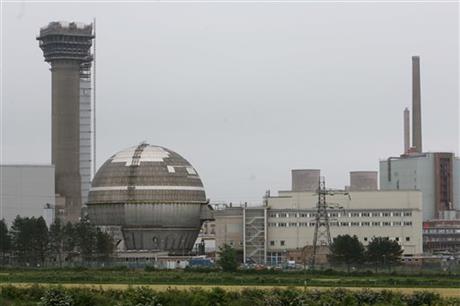 FILE – This is a Wednesday May 23, 2007 file photo of the Sellafield Nuclear Power Station in Sellafield, England. Sellafield said in a statement Friday Jan. 31, 2014 it had found “elevated levels of radioactivity at one of the on-site radiation monitors at the north end of the site.” It is being operated with reduced staffing. (AP Photo/Dave Thompson, File)

Sellafield said in a statement that elevated levels of radioactivity had been found at one of the on-site radiation monitors at the north end of the site. It added that there was “no risk to the general public of workforce.”

Only essential workers are being asked to report for shifts Friday, but the station in northwestern England is continuing to operate normally, it said.

“Levels of radioactivity detected are above naturally occurring radiation but well below that which would call for any actions to be taken by the workforce on or off the site,” the company said.

The company said the staffing decision was made to allow it to “focus on investigation and avoid disruption on and off the site.”

In a message to employees posted on its website, the company said all day personnel were asked to stay home unless specifically requested to report for duty but that laundry, canteen, utilities and transport staff should work as normal.

Those who could work from home were advised to do so if that was approved by their supervisors.

The problem was described as “an operational condition” at the Sellafield site.

The Sellafield complex, which also includes two former nuclear power plants that are currently being decommissioned, has long been targeted by anti-nuclear campaigners who say there is a high danger of a nuclear accident and that the site is a prime target for terrorists. They have pointed to a number of leaks and other incidents there over the years.

It was the subject of a long-running legal dispute between Britain and Ireland, which feared that radioactive waste from Sellafield could be polluting the Irish Sea.

The government has announced that it wants to build a new nuclear reactor at Sellafield by 2025.