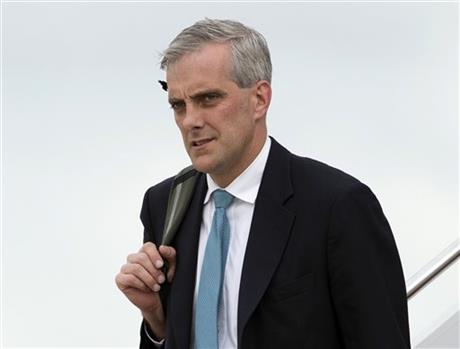 By PHILIP ELLIOTT
In this photo taken May 19, 2013 White House Chief of Staff Denis McDonough returns to Andrews Air Force Base, Md., after a trip with President Barack Obama. Asked on “Fox News Sunday”, Sept. 8, 2013, whether a congressional rejection of authorization to Obama for military action against Syria might endanger his presidency, McDonough said, “Politics is somebody else’s concern. The president is not interested in the politics of this.” (AP Photo/Carolyn Kaster, File)
WASHINGTON (AP) — The White House asserted Sunday that a “common-sense test” dictates the Syrian government is responsible for a chemical weapons attack that President Barack Obama says demands a U.S. military response. But Obama’s top aide says the administration lacks “irrefutable, beyond-a-reasonable-doubt evidence” that skeptical Americans, including lawmakers who will start voting on military action this week, are seeking.

“This is not a court of law. And intelligence does not work that way,” White House chief of staff Denis McDonough said, part of a five-network public relations blitz Sunday to build support for limited strikes against Syrian President Bashar Assad.

“The common-sense test says he is responsible for this. He should be held to account,” McDonough said of the Syrian leader who for two years has resisted calls from inside and outside his country to step down.

The U.S., citing intelligence reports, says the lethal nerve agent sarin was used in an Aug. 21 attack outside Damascus, and that 1,429 people died, including 426 children. The Britain-based Syrian Observatory for Human Rights, which collects information from a network of anti-government activists, says it has so far only been able to confirm 502 dead.

In an interview Sunday, Assad told U.S. journalist Charlie Rose there is not conclusive evidence about who is to blame and again suggested the rebels were responsible. From Beirut, Rose described his interview that is set to be released Monday, on the CBS morning program that Rose hosts with the full interview set to air on Rose’s PBS program.

At the same time, Obama has planned his own public relations effort. He has scheduled five network interviews on Monday and then a speech to the nation from the White House on Tuesday, the eve of the first votes in Congress.

Obama faces a tough audience on Capitol Hill. A survey by The Associated Press shows that House members who are staking out positions are either opposed to or leaning against Obama’s plan for a military strike by more than a 6-1 margin.

Added Rep. Loretta Sanchez, D-Calif.: “For the president to say that this is just a very quick thing and we’re out of there, that’s how long wars start.”

Nearly half of the 433-member House and a third of the 100-member Senate remain undecided, the AP survey found.

“Just because Assad is a murderous tyrant doesn’t mean his opponents are any better,” said Sen. Ted Cruz, R-Texas.

On Saturday, a U.S. official released a DVD compilation of videos showing attack victims that the official said were shown to senators during a classified briefing on Thursday. The images have become a rallying point for the administration. Sen. Dianne Feinstein, D-Calif., chairwoman of the Intelligence Committee, also posted videos on the committee’s website.

“Those videos make it clear to people that these are real human beings, real children, parents being affected in ways that are unacceptable to anybody, anywhere by any standards,” Secretary of State John Kerry said in Paris. “And the United States of America that has always stood with others to say we will not allow this — this is not our values, it’s not who we are.”

But McDonough conceded the United States doesn’t have concrete evidence Assad was behind the chemical attacks.

Recent opinion surveys show intense American skepticism about military intervention in Syria, even among those who believe Syria’s government used chemical weapons on its people.

Congress, perhaps, is even more dubious.

Complicating the effort in the Senate is the possibility that 60 votes may be required to authorize a strike.

Republican Sen. Rand Paul of Kentucky said he would consider a filibuster, but noted the delay tactic was unlikely to permanently nix a vote.

“They do not dispute the intelligence when we speak with them,” McDonough said.

But while the publicly discussed information lacks a direct link between Assad and weapons, the private briefs are no better, two lawmakers said.

“The evidence is not as strong as the public statements that the president and the administration have been making,” said Rep. Justin Amash, R-Mich. “There are some things that are being embellished in the public statements. … The briefings have actually made me more skeptical about the situation.”

Rep. Buck McKeon, R-Calif., said “they have evidence showing the regime has probably the responsibility for the attacks.”

But that’s not enough to start military strikes. “They haven’t linked it directly to Assad, in my estimation,” said McKeon, chairman of the House Armed Services Committee.

McDonough, an Obama foreign policy adviser dating back to his 2008 presidential campaign, said the dots connect themselves.

The material “was delivered by rockets — rockets which we know the Assad regime has and we have no indication that the opposition has.”

At the same time, McDonough acknowledged the risks that military action could drag the U.S. into the middle of a brutal civil war and endanger allies such as Israel with a retaliatory attack.

The U.S. is “planning for every contingency in that regard and we’ll be ready for that.”

Congress resumes work Monday after its summer break, but already a heated debate is under way about Syria.

Obama’s national security adviser, Susan Rice, plans to discuss Syria in a speech Monday at the New America Foundation and later meet with members of the Congressional Black Caucus. A bipartisan, classified briefing for Congress is set for Monday and another is slated for Wednesday.

McDonough plans to meet Tuesday with the House Democratic Caucus, whose support could be crucial as Obama faces opposition from House Republicans.

Obama planned to address the nation on Tuesday ahead of Wednesday’s first showdown vote in the Senate over a resolution that would authorize the “limited and specified use” of U.S. armed forces against Syria for no more than 90 days and barring American ground troops from combat. A final vote is expected at week’s end.

A House vote appears likely during the week of Sept. 16.

McDonough spoke with ABC’s “This Week,” CBS’ “Face the Nation,” NBC’s “Meet the Press,” CNN’s “State of the Union” and “Fox News Sunday.” McCaul and Sanchez were on NBC. Cruz appeared on ABC. Rogers and Amash spoke to CBS. Paul was interviewed on Fox. McKeon was on CNN.